When news first broke that Apple was planning to launch Macs with ARM-based processors that the company designed in-house, I didn’t think all of the company’s laptops and desktops would be using the same ARM chips.

But so far that seems to be the case. This week Apple introduced new iMac all-in-one desktop PCs that have the same Apple M1 processor as the Mac Mini, MacBook Air and MacBook Pro 13 the company launched last year. Apple is also bringing the very same chip to its 2021 iPad Pro tablet lineup.

And that means whether you pay $699 for an entry-level Mac Mini, $799 for an for an entry-level iPad Pro, or $1699 for a top-of-the-line iMac, you’re getting the same processor. It’s a good processor. It outperforms the competition in most benchmarks while consuming less power, and aside from a few app compatibility issues, it supports most macOS and iOS applications. You can even run Windows apps if you buy the latest version of Parallels.

But for years we’ve gotten used to the idea that you have to pay more for a higher-performance version of the latest Intel or AMD processors. Apple has turned that idea on its head. Now you still have to pay more if you want extra memory, storage, or a better display… and you’ll probably have to pay up front, since most of those things are soldered to the motherboard and no longer user upgradable.

But the processor? If you’re buying a Mac or iPad with Apple Silicon, there’s only one option… sort of. Apple does disable a single GPU core in some models, and if you buy a fanless device like the MacBook Air, it won’t offer quite the same level of sustained performance, but it’s still pretty fast. 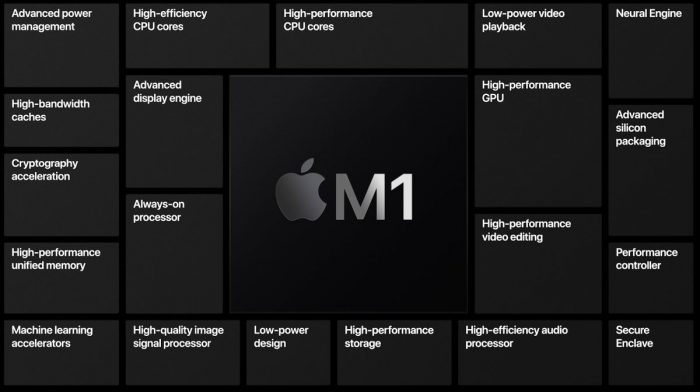 I doubt this shakeup will lead to any significant change in the x86 space. AMD and Intel will likely continue cranking out a wide range of chips that sell for different price points. Heck, that’s the way ARM-based chip makers like Qualcomm, Samsung, MediaTek, and Huawei do things too. But since Apple has fewer products to maintain, the company can afford to do things differently.

I’ve seen evidence that this new UI design is the default in AOSP. Buckle up for a drastically redesigned UI in Android 12!

21 replies on “Lilbits: Apple M1 in everything, PinePhone as a pocket-sized Linux laptop, and Android 12’s Quick Settings redesign”