The operating system for Amazon’s Fire tablets is a fork of Android called Fire OS that’s tightly integrated with Amazon’s apps and services including Kindle, Prime Video, Prime Music, and the Alexa voice assistant. And instead instead of the Google Play Store, the tablets ship with Amazon’s Appstore.

It’s fairly easy to sideload third-party apps that may not be available in Amazon’s store. And you can even install the Google Play Store. One thing that’s a little tougher to do these days is completely replace Amazon’s default home screen & launcher app. But it is fairly easy to make the home screen look a little more like other Android tablets by disabling the Continue & Discover row near the top of the screen. 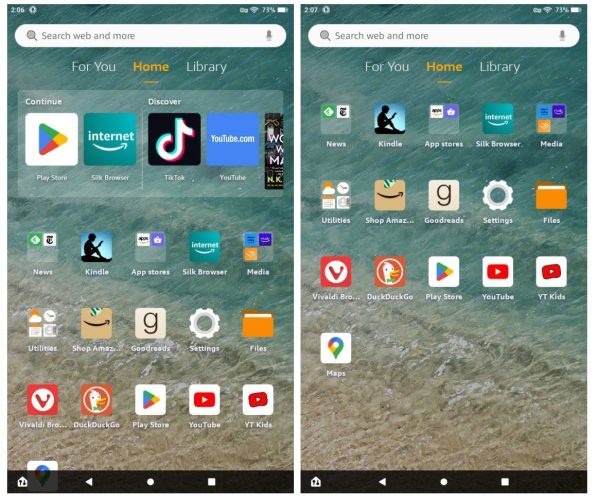 The default user interface on Amazon’s Fire tablets puts a large Continue & Discover section in a prominent position. I suppose this could come in handy if you want a quick way to jump back into apps you were recently using or… umm… really want Amazon’s recommendations for apps, eBooks, and videos you might like.

But this section also takes up valuable screen space that could be used to display more apps. Fortunately it’s pretty easy to disable. Or if you like the Continue function, but want to ditch the Discover tab, you can do that too.

Now when you return to the home screen, you should see those changes. Note that the screenshots below show the step-by-step process on an Amazon Fire 7 (2022) tablet running Fire OS 8. But the steps are nearly identical for tablets running Fire OS 7, even though some menus may look a little different.

This hack is a little wonky though, because it requires installing a third-party app called Automate that notices when you press the home key and sends a message to your tablet to open a custom launcher instead of the default launcher… and Automate sometimes shuts down the service required for this to work and needs to be reminded to run it again. That’s one of the reasons I prefer to customize the default Amazon home screen rather than trying to replace it.