Amazon’s Kindle Oasis is the company’s top-of-the-line eReader, featuring a bigger screen, more LED lights for a more evenly illuminated display, and other features to help set it apart from the Kindle Paperwhite and entry-level Kindle.

You can adjust warmth as well as brightness, which basically means you can reduce or remove the amount of blue light generated by the LEDs if you’re reading before bedtime.

The new Kindle Oasis is up for pre-order for $250 and up and it should ship in late July. 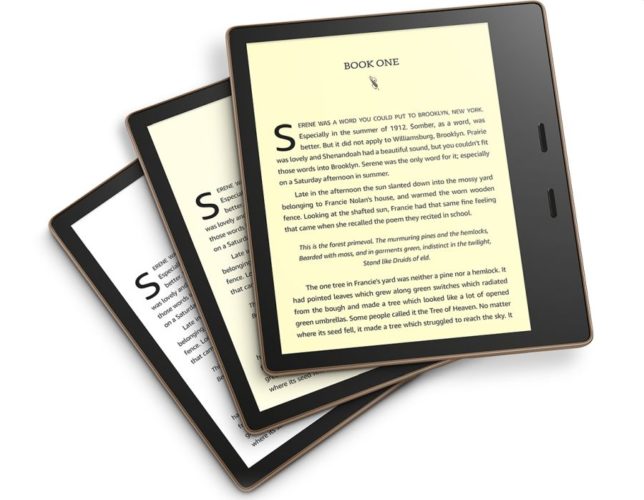 Like the 9th-gen (2017) Kindle Oasis, the new model has physical page-turn buttons, support for automatic screen rotation, and sensors that can automatically adjust the lighting level.

But not only does the new model let you adjust the color temperature of its LED lights, it has more than twice as many LEDs (25, up from 12). Weighing 188 grams (6.6 ounces), it’s also about 6 grams (0.2 ounces) lighter than its predecessor.

That said, one thing to keep in mind is that while Amazon dominates the eReader space, the company isn’t always the first to add new features. While this is the first Kindle device with adjustable color temperature, rivals like Kobo and Barnes & Noble have been offering a similar feature for years — for as little as half the price.

The most affordable Kobo device with “ComfortLight Pro” illumination sells for $130, while a B&N NOOK GlowLight 3 with “Night Mode” sells for just $120.

Meanwhile, if you don’t care about color temperature, now’s a pretty good time to save some money on a previous-gen Kindle Oasis: Amazon is selling the 2017 Kindle Oasis for $50 off while supplies last, bringing the starting price down to $200. If you have an Amazon Prime Visa credit card, you can also score 20% cash back, bringing the effective price down to $160 + tax.

As for the new model, it has a 300 pixel per-inch E Ink display that sits flush with the sides of the eReader, it supports IPX8 water resistance, and it’s available with 8GB or 32GB of built-in storage.

It’s available in champagne gold and graphite color options (the front is black on both models).

One thing that Amazon doesn’t seem to be updating? Connectivity. The new 10th-gen Kindle Oasis has the same micro USB 2.0 port and 802.11b/g/n WiFi featured in earlier versions. That’s not a huge issue — it’s not like you really need high-speed internet for downloading eBooks. But at a time when USB-C charging is becoming increasingly common on smartphones, tablets, and even laptops it’s a bit annoying that you’ll still need to keep around a micro USB charger for Amazon’s premium eReader.