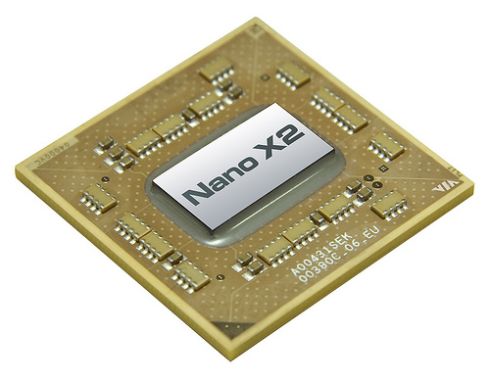 It’s apparently chip week. Hot on the heels of new product announcements from chip-makers Intel, AMD, and Freescale, the folks at VIA have announced a new dual core version of the company’s low power Nano chipset. It’s called the VIA Nano X2, and while this isn’t the first we’ve heard of the new processor, it looks like the product is a bit closer to general availability. VIA says it’s already available for customer sampling, and computers using the new X2 chip are expected to ship in the first quarter of the year.

The X2 is a 64-bit chip built using a 40nm process and has the same “Isaiah” architecture as earlier Nano chips. You can get up to twice the performance (with applications that support multi-threading) without using any more power. The VIA Nano X2 is pin-to-pin compatible with earlier VIA chips including the single core Nano, VIA C7, and VIA Eden processors, which should make it easy for computer makers to switch to the new chip without completely retooling their designs.

Unfortunately VIA has become a bit player at best in the US, so I’m not holding my breathe waiting to see computers with these chips show up on US shores. But the company has had some success getting Nano chips into low cost laptops, nettops, and other computers in China and other developing markets.

One reply on “VIA launches dual core Nano X2 chips”