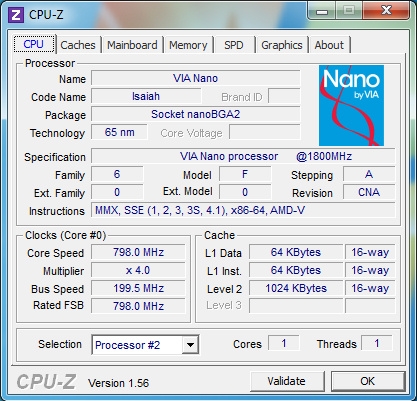 It’s been about a year since VIA first introduced the VIA Nano 3000 low power chipset. Now the company is finally starting to offer a dual core version. The folks at Bit-Tech got a chance to take a new VIA Nano Dual Core chip for a spin recently. PC Watch also has some details, including the CPU-Z results shown in the image above.

In a nutshell, the chip has a 25W TDP, which means it doesn’t draw any mroe power than VIA’s single core chips. Rightnow the chips are built using a 65nm process, but VIA plans to reduce the size to 40nm, which will reduce power draw.

In Bit-Tech’s benchmarks, the Nano Dual core was noticably faster than a single core Nano chip or a dual core Intel Atom 330 chip. It wasn’t quite as fast as an Intel Core 2 Duo SU7300 CULV processor though. The test rig was also able to play some 1080p HD video content, but Bit-Tech concluded that better software drivers are needed to enable hardware accelerated video playback in popular media players.

The Nano Dual Core chip also handled several recent video games admirably… for a low power chip. It’s certainly no replacement for a high end chipset with dedicated graphics, but it appears to outperform Intel’s Atom chips with integrated graphics. Of course, it also uses more power than an Atom chip, which means you probably won’t get the same kind of battery life. But VIA’s Nano chips still use less power than a typical laptop chip.

via Netbook News and nDevil