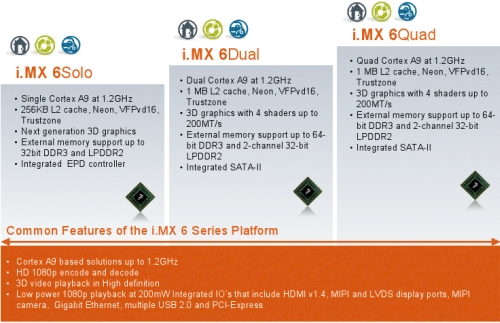 Chip maker Freescale plans to launch a new line of low power, ARM-based chips in the coming months. The i.MX 6Solo, i.MX 6Dual, and i.MX 6Quad will all be based on ARM Cortex-A9 architecture, but as you probably guessed fromt he names, the chips will be available in single, dual, and quad-core versions.

While the 6Solo will be the cheapest of the three chips and the 6Quad the most expensive, the price difference isn’t expected to be all that great. Freescale tells me the single core chip will be available to device makers for under $10, while the quad core will cost more than $20, with the dual core model falling somewhere in between. Sure, that means the quad-core chip will cost more than twice as much as the single core chip, but we’re still not talking about a lot of money here.

Freescale is targeting these chips at tablets and similar low power devices. While you hear a lot more about consumer tablets powered by Qualcomm, NVIDIA, and Samsung chips, Freescale’s low power chips are actually available in nearly a dozen tablets from white box Chinese vendors today, and the company’s low power chips power the majority of E Ink eBook readers on the market.

The company has been a bit behind the curve in the dual core chip space, but by launching new single, dual, and quad-core chips at the same time, Freescale will be among the first companies to make quad core ARM-based chips available. All three new chips will begin sampling in the second quarter of 2011, and the company expects devices using the new chips to hit the market before the end of the year.

While you might think that the quad-core chips will sap battery life like nobody’s business, they’re actually designed so that under some circumstances you could get better battery life from a quad core chip than a single or dual core model. That’s because total power consumption comes from a combination of clock speed and voltage.

You can run 4 processor cores at 300MHz at a low voltage and achieve the same kind of performance as you’d expect from a 1.2GHz processor which is using much more energy. Of course, you could also ramp up the speeds on those 4 processor cores to perform resource-intensive tasks that might not even be possible on a single core chip, which will eat into battery life. It may take some more software advances before we actually see operating systems and mobile applications designed to fully take advantage of this technology, though.

All three of Freescale’s new chips will be able to support 3D graphics and HD video. The quad-core chip should even be able to perform seriously heavy-duty tasks such as recording stereoscopic 3D video.