Plastic Logic, Intel, and Queen’s University in the UK are showing off a prototype of a new tablet concept with a flexible ePaper screen. It’s called the PaperTab, and while it’s a 10.7 inch plastic screen, it’s designed to look and feel like paper. 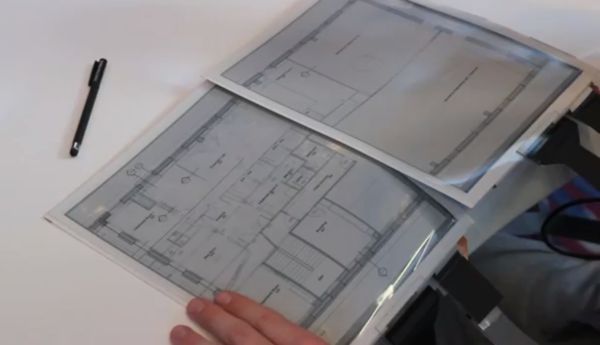 You can hold it in your hands like a piece of paper, view high-resolution, high-contrast gray-scale images. And you can even “turn” pages in a document by bending the screen as if you had been flipping pages.You can also fast-forward by holding down one edge of the screen or go back by holding the edge up.

PaperTab features a touchscreen, so you can use an on-screen keyboard or a stylus. But that’s just the tip of the iceberg — because PaperTab isn’t just designed to be used as a standalone tablet. Instead, the idea is to use multiple PaperTab devices together.

Each PaperTab is meant to run one app in full screen, so instead of multitasking by flipping between apps on a single tablet, you just pick up the PaperTab that’s running the app you need — much like picking up the piece of paper that has that phone number you need printed on it.

Right now the PaperTab is just in the concept phase, and it’s not clear if this technology will ever come to market — or even if there’s demand for it. But it’s a pretty nifty vision of the future of paper.

The prototypes are powered by Intel Core i5 Sandy Bridge processors and sensors to make the tablets location-aware.

One reply on “PaperTab concept tablet is a 10.7 inch, flexible ePaper tablet”