The Amazon Fire TV Stick is a $39, pocket-sized device that you can plug into the HDMI port of your TV to stream music, movies, TV shows, and other media from the internet. It supports a handful of popular media streaming services including Netflix, YouTube, and of course Amazon Instant Video and Amazon Music, and you can also use it to play games.

But there’s something else you can do with the Fire TV Stick: sideload Android apps that don’t come from the Amazon Appstore.

And that includes popular media center app XBMC (which has been renamed as Kodi since this article was published). 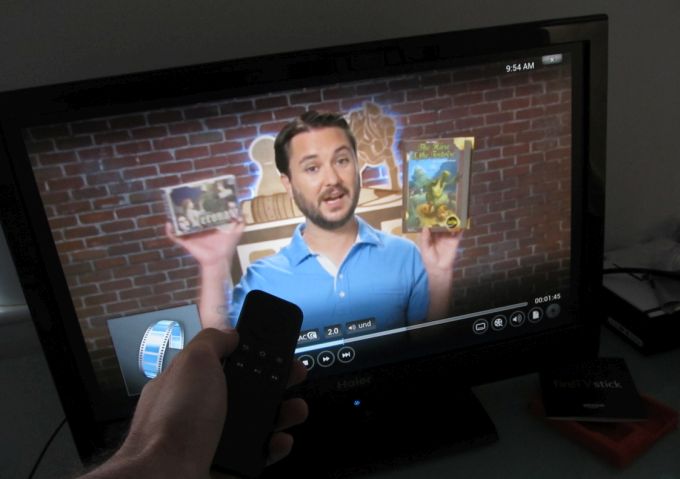 Update: If you want a super-easy way to install a Kodi-like app, just give MrMC a try. It’s available from the Amazon Appstore for $2.99 and it’s a fork of Kodi which features the same user interface and media player capabilities for streaming content from shared network drives, among other things. You also don’t have to jump through hoops to get the app to show up on your home screen. But MrMC lacks support for add-ons that let you stream music and videos from online sources.

Want those other features? Then follow the steps below to install the full version of Kodi.

I’ve used Kodi to stream media from the Internet Archive, NPR, Geek & Sundry, and YouTube (in case you don’t like the official YouTube app for the Fire TV). This makes it easy to stream music or videos from a number of services that might not otherwise be available for the Amazon Fire TV Stick.

Just like the original, $99 Amazon Fire TV, the $39 Fire TV Stick runs an operating system based on Google Android. It doesn’t look much like Android, but if an app can run on Android, it can probably run on a Fire TV (or Fire tablet).

Note that you won’t be able to install the Google Play Store or other apps that rely on the Google Services Framework unless you root your device, and even then there’s no guarantee everything will work perfectly.

Fortunately XBMC isn’t one of those apps, so let’s talk about how you would load an app like XBMC/Kodi.

1. Navigate to the Settings screen.

2. Scroll over to the System option and then scroll down until you see “Developer Options” and hit the select button. 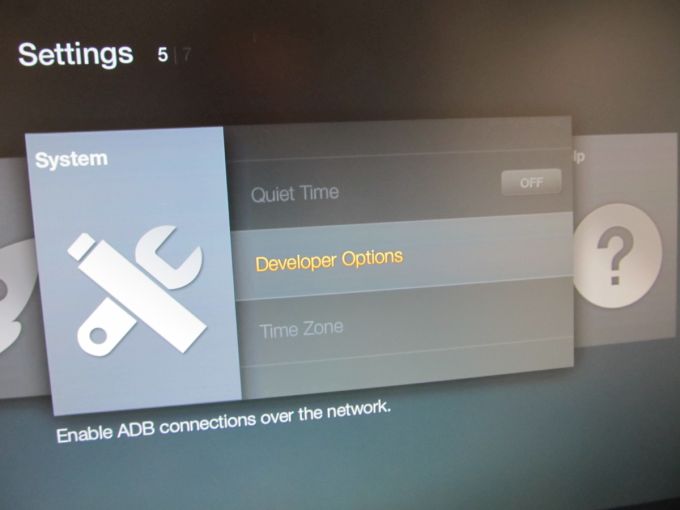 3. Now flip the toggles to turn on ADB debugging and Apps from Unkown Sources. 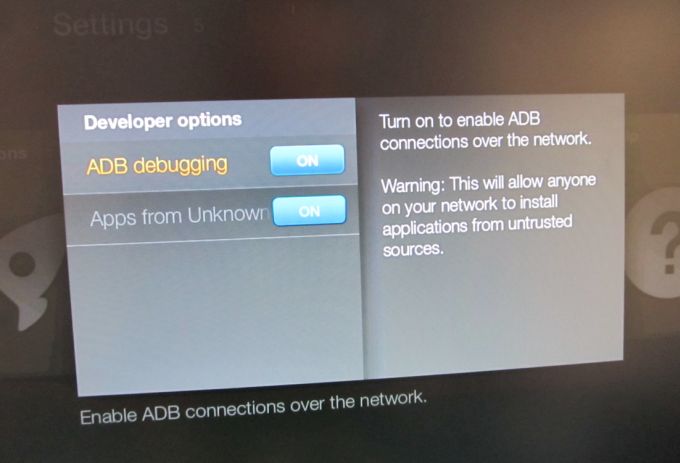 4. Hit the back arrow on your remote to return to the System settings.

Update: The next few steps tell you how to connect a Fire TV Stick to a PC so you can transfer and install Kodi wirelessly using Android’s adb developer tools. If you don’t want to go through the trouble, there’s another option: find eSaba’s free Downloader app in the Amazon Appstore and then install it on the Fire TV Stick. Open the app, and enter the URL for the latest version of Kodi for ARM processors, which you can find at this link. From there you can install the app and skip ahead to the next section.

5. Scroll up until you find “About,” hit select, and then scroll down to “Network” and make note of the IP address. You cannot connect a Fire TV Stick to a PC with a USB cable, so we’ll have to connect over WiFi, and that’s where that IP address come in handy.

6. Now we need to connect the Fire TV to a computer — there are two ways to do this.

6a. If you already have the Android SDK on your computer, just open a command prompt, navigate to the folder where adb is located, and type the following:

Note that where it says [ipaddress] you’d type the actual ip address. 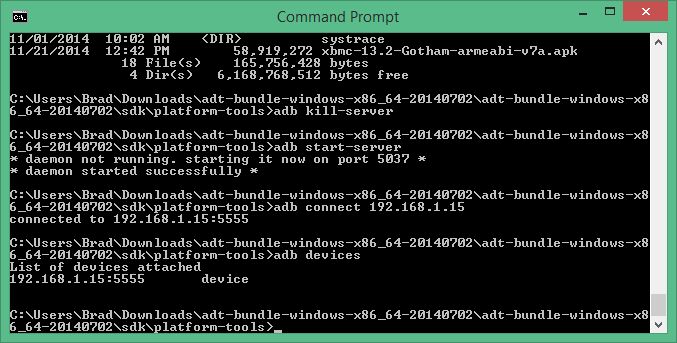 You can check to see if your Fire TV stick is connected by typing “adb devices” without the quotes. Note that if you’re using a Mac or Linux computer you may have to put a ./ in front of the adb command.

6b. Don’t have the Android SDK and/or adb installed and don’t want to have to learn to use it or type anything into a command prompt? There’s an app for that.

Actually there are several, but we’re going to take a look at adbFire, a cross-platform tool for Windows, OS X, and Linux. 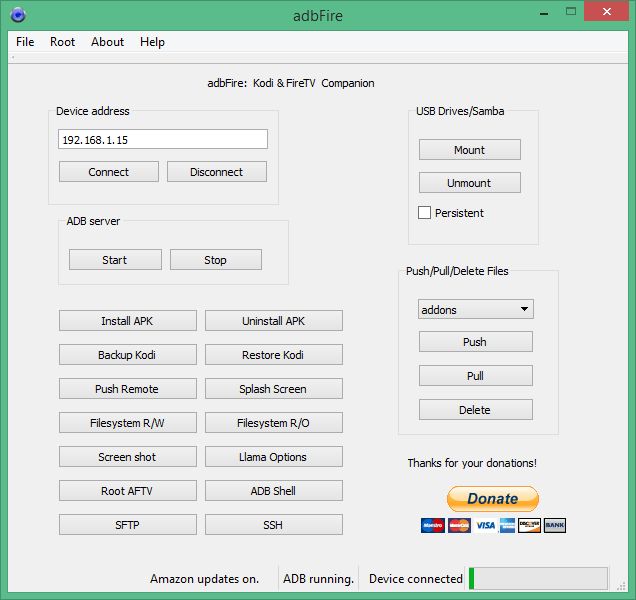 To use adbFire, just download and unzip the package, start the adbFire executable, type your IP address in the window where it says Device address, and click “Connect.”

7. Alright, now it’s time to install your app. Download the latest version of XBMC or Kodi from the Kodi website (or locate any other Android APK you want to try installing).

8a. If you’re using adbFire, choose the “Install APK” option, select your APK file, and click “yes” on the following screen. A progress bar at the bottom of the screen will let you know that the file is being sent. 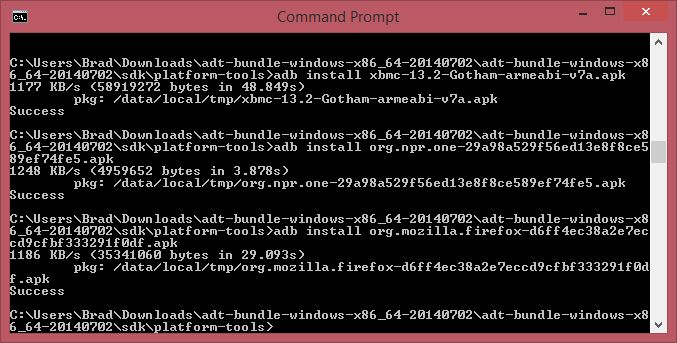 8b. If you’re using a command prompt, just type “adb install name.of.your.APK” without the quotes and wait until you see the word “Success.”

Now you app should be loaded on your Fire TV Stick… but you won’t see it on the home screen. Here’s how you can find and launch it.

Update: If you have a Fire TV device running Fire OS 5.0.4 or later, there’s an easier way to launch sideloaded apps: just scroll down to the apps menu and find them. If your device is running an older version of Fire OS, you can try installing a third-party app launcher.

Otherwise, you can always try the steps below:

1. Scroll down to the Settings menu. 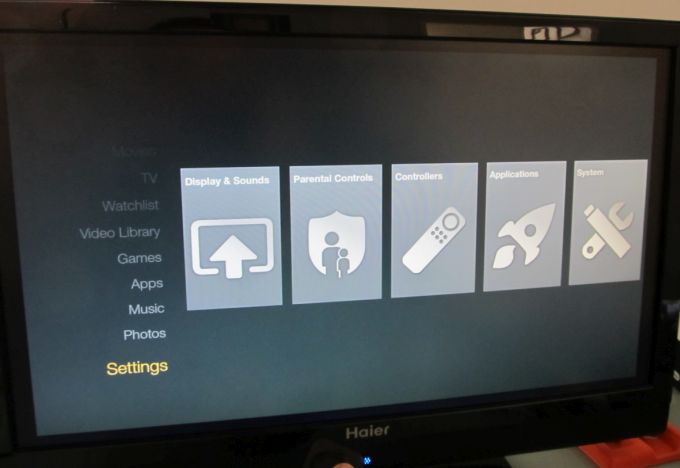 2. Navigate to the Applications option and hit the select button.

3. Scroll down and select the entry that says “Manage All Installed Applications.”

4. Scroll down until you find the app you want to launch. Select it, and choose the option for “Launch application.” 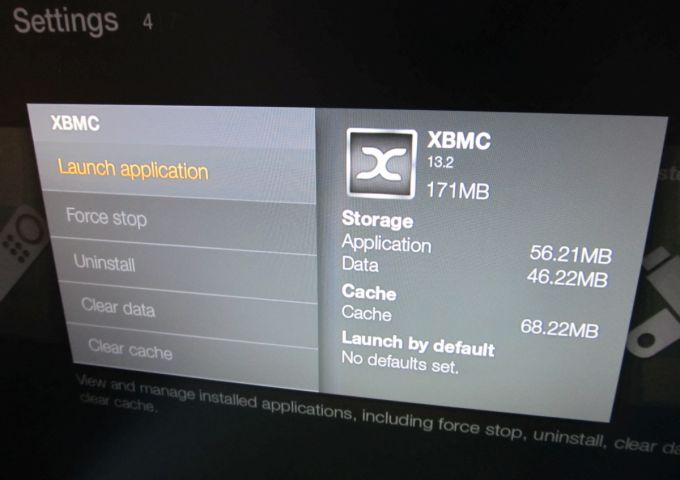 That’s it… it’s a bit of a hassle, but it’s the simplest way to launch sideloaded apps without rooting your device or trying to replace the official Amazon app launcher.

The Manage All apps menu is also where you’d find the option to uninstall apps — so if you try sideloading an Android app or two only to find it doesn’t run well on the Fire TV Stick, you can just uninstall the app from here.