This week Google started selling audiobooks through the Google Play Store. And after purchasing a book this afternoon, I was getting ready to join Nate from The Digital Reader in declaring that the experience of actually using Google Play for audiobooks is frustrating and disappointing.

But while I was tinkering with the Google Play Books app on my phone, it seems to have updated and now it does almost everything I’d expect.

Unfortunately there are still a few things that will probably keep me from spending a lot of money on audiobooks from the Play Store. 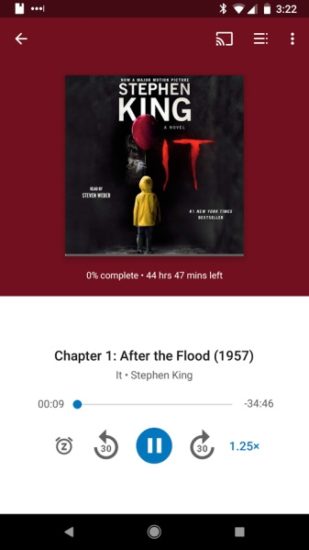 To be fair, you can download an audiobook to an Android device so you can listen when you’re offline. But it’s saved in a folder that’s inaccessible unless you have a rooted device. Since my phone isn’t rooted, I’m not sure if the file is protected by DRM or if it’s a DRM-free MP3 like the music that Google sells. The point is moot for me, since I have no way to transfer audiobooks off of my phone and onto my PC for safe keeping.

My second issue is that while the Google Play Books app has been updated to function as an audiobook player (as well as an eBook reader), there’s a key feature missing: bookmarks.

If you stop listening, the app will pick up where you left off. But it’d be nice to be able to save a space in case you want to flip back and forth a bit. And if you accidentally click on the wrong chapter from the table of contents, good luck finding your place again.

I purchased an audiobook copy of Stephen King’s It, and it’s a 45-hour listen with some chapters lasting for as long as 3.5 hours. I’d hate to lose my place and be unable to find it again.

Other than that, it looks like Google has worked out most of the kinks. Initially it was easy to buy an audiobook from the Google Play Store, but impossible to find it in the Google Play Books app. The only way I could find to actually start playing it was to find the purchase in the Family Library section of the Google Play Store and choose the play option from there.

But now there’s a new “Audiobooks” tab in the Library section of the app that shows any audiobooks in your account.

The Google Play Books home page also shows recent purchases at the top of the screen, with a “Play” button for audiobooks and a “Read” button for eBooks. 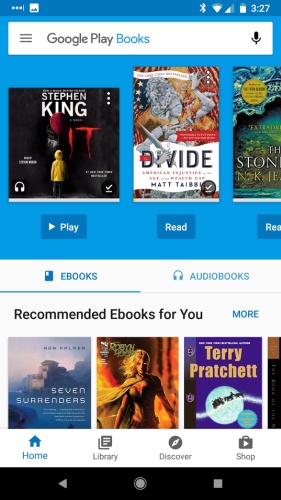 While there probably aren’t a lot of great reasons to buy audiobooks from Google Play rather than from Audible, Libro.fm, or other sources, at least the service is functional… and if you’re a Google Opinon Rewards user, you can essentially buy audiobooks by answering surveys.

I only bought It was because I already had a balance in my Google Play account and because I was curious to see how the new feature worked. Maybe I’ll actually listen to it… if I have 45 hours to kill (or a bit less since you can also listen to books at speeds ranging from 0.75x to 2x the normal speed). 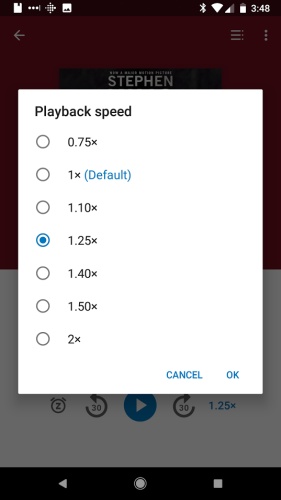