It looks like Sony might be pulling out of the Digital Paper market, but a new company may be stepping up to fill the space. Industrial PC maker Avalue and E Ink have introduced a new Digital Paper Tablet that features a large E Ink display with support for finger and pen touch input and a non-slip surface area designed to mimic the feeling of pen-on-paper when you’re writing or drawing with a digital pen.

Avalue probably won’t be selling this tablet directly to consumers under its own brand name. Instead, the company is offering up the solution for clients looking for ePaper writing & reading tablets. 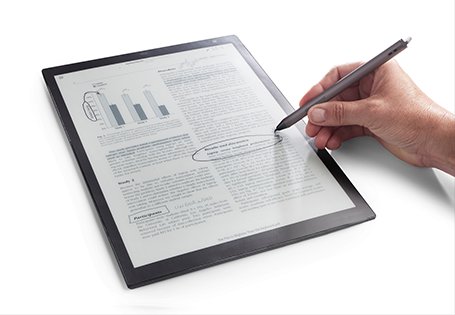 Detailed specs aren’t mentioned in the press release or on the E Ink Digital Paper Tablet website. But the device is described as having a letter-sized digital paper display, which means you should be able to read PDFs or other documents without the need to zoom or scroll.

The tablet is said to be about as thick and weigh as much as 30 pieces of paper, offer up to 3 weeks of battery life, support wireless connectivity, and have a black and white E Ink display which is high-contrast, low-power, and sunlight-readable.

Or if you don’t feel like waiting for an Avalue-made Digital Paper tablet to hit the streets, there’s always the reMarkable 2. This ePaper writing slate is a little smaller, with a 10.3 inch E Ink Carta display, but it went up for pre-order earlier this year for $399 and it’s expected to begin shipping in September (although new customers who order today won’t receive the tablet until November).

Early reviews of the reMarkable 2 from Engadget, The Verge, Gizmodo, TechRadar, and CNET are mostly positive. And while a $399 black and white tablet probably isn’t for everyone, right now it seems like this may be one of the best options in this very niche space.