When Amazon launched its first smartphone last year, the Fire Phone didn’t look too bad on paper: it features a 4.7 inch, 720p display, a 13MP rear camera, and the same Qualcomm Snapdragon 800 processor used in the Google Nexus 5.

But the Amazon Fire Phone isn’t a Nexus 5. It runs Amazon’s custom version of Android rather than Google’s stock version. It features tight integration with Amazon’s app, music, video, and book stores instead of Google’s. And it has a locked bootloader, which makes it difficult to replace the software that comes with the phone.

No wonder Amazon slashed the price of the phone shortly after launching it, and regularly sells it for less than half of that price. Right now you can pick up a carrier unlocked Fire Phone for $199, and sometimes it’s available for even less.

But… you might not have to use Amazon’s software after all. 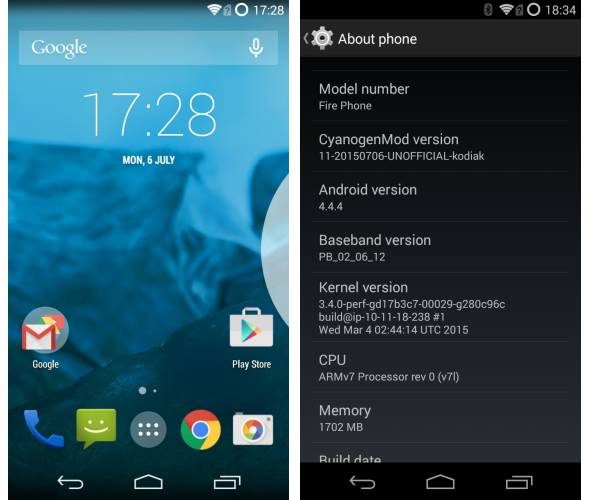 While the bootloader remains locked, some Fire Phone users have been rooting their phones and installing the Google Play Store for ages.

More recently, developer ggow ported hashcode’s Safestrap utility to the Fire Phone. This makes it possible to load custom firmware on some devices even though they have locked bootloaders. Instead of replacing the software on your device, Safestrap provides a way to bypass it altogether.

For the next trick, ggow ported CyanogenMod 11 to run on the Fire Phone.

This gives folks an opportunity to replace Amazon’s custom version of Android with something that looks a lot more like Google’s stock Android software.

CyanogenMod 11 is based on Android 4.4 KitKat and supports most Android apps. Most things seem to work, but as of July 13th, you’ll need to install a third-party camera app because there are problems using the default camera.

Now that the door’s been opened, I wouldn’t be surprised to see other custom ROMs for the Fire Phone in the future.

Sure, you could probably find plenty of other smartphones with Android software that sell for $200 or less. But if you’ve already got a Fire Phone, now you can make it feel more like a Google device than an Amazon device. And if you don’t already have a Fire Phone, it’s worth noting that the $199-ish price tag includes a free 1-year subscription to Amazon Prime, which is worth $99.

16 replies on “CyanogenMod takes Amazon out of the Fire Phone”