Barnes & Noble is pulling the plug on its NOOK tablet line, and will stop manufacturing new Android tablet, although the retailer will reach out to other device makers. In other words, you may still be able to walk into a B&N store and buy a tablet with the NOOK Shop preloaded a year from now, but it won’t be built by Barnes & Noble.

The company has been making affordable Android tablets with a custom user interface and tight integration with the NOOK eBook and app stores since 2010. But increased competition in the low-cost tablet space appears to have taken its toll on the company, and in response to sluggish sales of its tablets, B&N is getting out of the Android tablet business altogether.

B&N will continue to deliver NOOK eReaders like the NOOK Simple Touch. 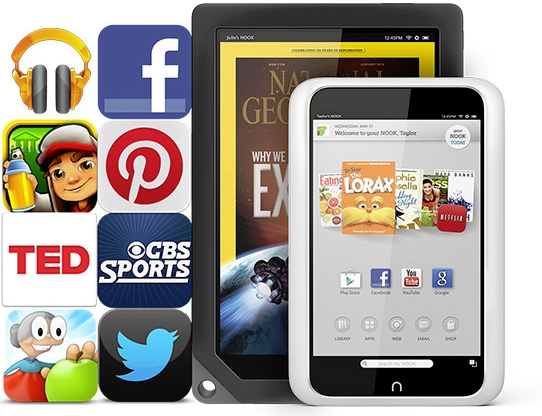 Anyone who’s been watching the prices of Barnes & Noble NOOK tablets plummeting in recent months shouldn’t be surprised by today’s announcement.

At those prices, they’re actually pretty stellar devices. They have high resolution displays, relatively speedy TI OMAP 4 dual-core processors, and an operating system based on Android 4.0 Ice Cream Sandwich. You can also install CyanogenMod if you want a newer version of Android, or something closer to Google’s stock version of the operating system (although B&N doesn’t officially support doing this).

Recently the NOOK HD and NOOK HD+ became even more useful, when B&N added support for the Google Play Store. You’re no longer limited to buying books or apps from the NOOK Shop. You can now grab virtually any app available for Android — even the Amazon Kindle app.

But having a great device doesn’t always mean having great sales. Overall B&N revenues are 7.4 percent lower this quarter than during the same period last year. But NOOK revenues are down 34 percent from last year.

So instead of making and selling its own tablets, the company is planning to move to a “partnership” model.

Essentially, it’ll try to get other companies to build tablets that come with NOOK software preloaded. You’ll probably be able to buy those devices in Barnes & Noble stores if and when when they’re available. Who knows? They might even have the NOOK name on them. But they won’t be built in-house.

It’d be silly for any major bookseller to ignore the eBook space at this point, so this isn’t an end to the NOOK lineup. B&N plans to continue adding digital books to its catalog and to continue pushing its eReader apps for Android and other platforms, and productions of the NOOK Simple Touch and Simple Touch with Glowlight will continue.

But if you’re planning to pick up a $149 NOOK HD+ or $129 NOOK HD, you’ll probably want to grab one while you still can. Once the remaining inventory is gone, it’s gone.