Barnes & Noble is fighting back against the encroachment on the low-cost tablet market they carved out with the Nook Color and Nook Tablet that has seen strong challenges from the likes of the Kindle Fire HD and Google’s Nexus 7. This holiday season they’re introducing the next generation of reader’s tablet: the 7-inch Nook HD and 9-inch Nook HD+. 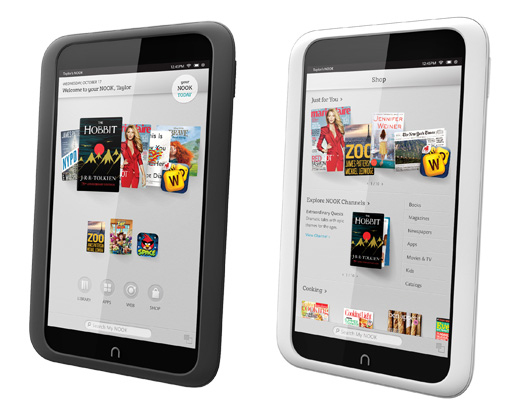 They keep the low-cost heritage with a starting price of $199 for the HD and $269 for the HD+. Pre-orders begin today and B&N says they’ll ship in early November.

My first impression of the tablets is that they offer real competition for the Kindle Fire HD, not just because they have superior design and hardware, but because the Nook finally has a video offering. 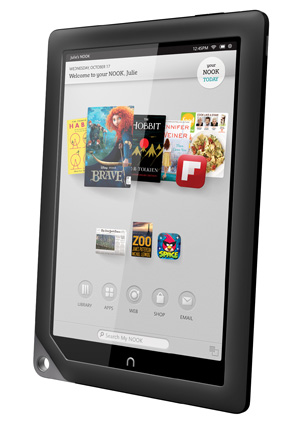 There are a lot of new aspects to the Nook HD and HD+ on both the hardware and software side. First, the geeky hardware stuff.

The HD comes with either 8GB or 16GB of internal memory and in two colors: Snow and Smoke, otherwise known as white and black.

The HD+ just comes in Smoke and also has two storage sizes: 16GB and 32GB. Both models have microSD card slots that take cards with up to 64GB of extra storage space.

Both have the same dual-core OMAP 4470 CPU inside, though the HD’s is clocked at 1.3GHz and the HD+ is clocked to 1.5GHz. Interestingly, B&N is quiet on the subject of RAM.

Both are wireless only, no 3G or 4G versions. However, this time around they added Bluetooth and demoed wireless audio for me (which sounded pretty good). I’ll have to test whether keyboards will work with it.

No camera on either model because Barnes & Noble customers apparently just don’t care about them. 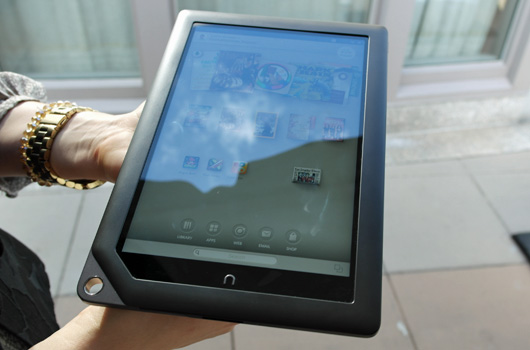 The IPS displays on Nooks have always been their best feature, and this time is no exception. The colors really pop, viewing angles are wide, the resolution makes everything, even tiny text, super crisp, and it even does okay in sunlight. It’s an excellent showcase for magazines, kids books, video, games, apps, etc.

The next best thing about both tablets is that they’re really light. The HD is 11.1 ounces and designed to fit in one hand as it’s just 5 inches wide. It’s far more comfortable to hold this way than the 7-inch Kindle Fire HD, yet there’s still room for a wide bezel on the left and right sides where users can rest their thumbs. B&N also added a contoured, soft-touch back reminiscent of the Nook Simple Touch.

The 9-inch HD+ also has a nice weight for something at this size (18.2 ounces) and feels more like something you can hold for hours while reading than even the iPad.

The battery life is rated at 10 hours of reading and 9 hours of video playback for both. 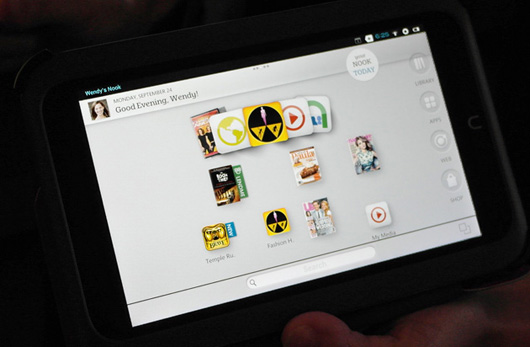 In addition to new hardware and design, the Nooks each get some new software. This time it’s built on Android 4.0 Ice Cream Sandwich, but the UI on top is a little cleaner and easier to navigate.

Everything from the Home screens to the Library to navigation and the Shop got a nice overhaul. Though the models I saw were pre-production, everything moved smoothly and graphics looked great.

One of the biggest changes is the introduction of profiles. These allow multiple people to share a Nook yet not have to comb through everyone else’s books and apps and stuff to find what they want. Profiles are a big plus for parents, too, as they can keep their kids from seeing adult books and content plus apply multiple levels of protection such as blocking apps, the web, and purchasing.

The web browser is now somewhat more usable and fast, though I’ll reserve judgment until I see the final version. Big improvements on the Mail app, though. Now it supports Microsoft Exchange, Gmail, Hotmail, Yahoo and others.

Nook magazines and newspapers also got an overhaul for the new HD screens — in fact the 9-inch HD+ is the size it is specifically to allow for reading magazines at the natural aspect ratio. B&N is also adding catalogs to the experience so that users can shop stores right from the tablet. 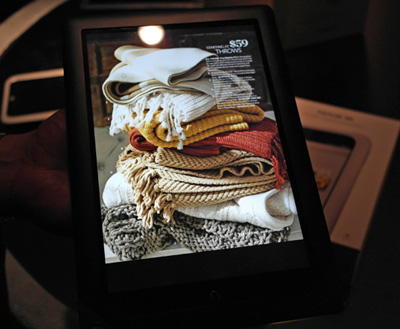 However, the best new feature around magazines and catalogs is the Scrapbook. With this tool you can save individual or groups of pages from this content into personalized books. The scrapbooks themselves work just like magazines, allowing you to flip pages and see all the pages in the Content view. This will be very useful not only for shopping across catalogs, but also for people who want to save articles that aren’t online.

One last thing on the hardware side. B&N changed the connector on the bottom from a non-standard micro USB to a 30-pin similar to the iPad’s. This isn’t just to make anyone who loses their charging cord shake their fist at the heavens. This I/O port has more flexibility and introduces something I’ve wanted to see ever since the Nook became a video vehicle: HDMI output. 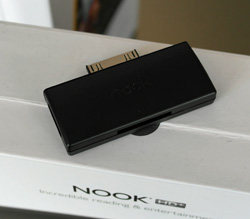 Yes, there is a dongle involved and yes it costs extra. With it you can connect to the HDMI in on an HD TV or monitor and output in 1080p from both the Nook HD and HD+.

This, in combination with Nook Video, Netflix, and Hulu Plus makes the Nooks nice portable media centers.

At a glance comparison to the Kindle Fire HDs:

My first impression of the Nook HD and HD+ is very positive. I can’t wait to see the final versions and compare it to the Nexus 7 and the Kindle Fire HD.