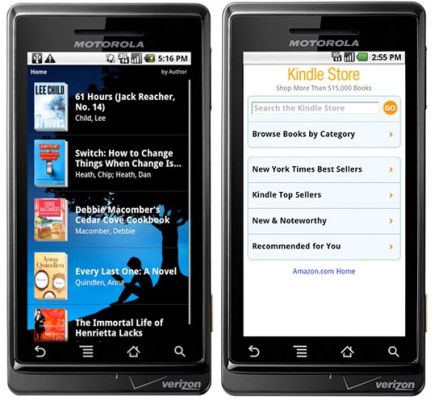 Google Android is officially becoming a decent platform for anyone who likes to read eBooks on their phones and other mobile devices. Last week Kobo released an Android app that basically lets you download and read any title that Borders sells in its eBook store. And today Amazon finally got around to releasing a Kindle app for Android, which joins the company’s iPhone, BlackBerry, PC, and Mac apps.

The Kindle app for Android doesn’t have all the features available in the iOS version. The most notable omission is support for audio and video content. But you can now access Amazon’s library of 600,00 digital books on your Android device — and synchronize your books, bookmarks, last page read, and other annotations across multiple devices with Kindle software.

Of the three top US booksellers, that just leaves Barnes & Noble without an Android app, and one is reportedly in the works. It’s kind of silly that it’s taking so long to release though, since the Barnes & Noble Nook eBook reader runs on Android…

You can read more about the new Kindle app for Android at Mobiputing.