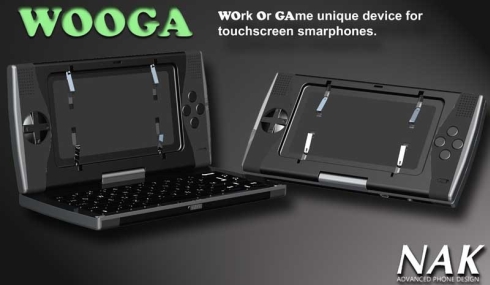 Smartphones are getting more and more powerful. I’ve been playing with a Google Nexus One phone for the last few days, and thanks to its 1GHz Qualcomm Snapdragon processor, it loads web pages over WiFi almost as fast as a netbook. It can also handle audio and video playback with ease, and the Google Android operating system really seems quite zippy on the phone. Of course, we’re going to start seeing laptop-style devices with similar guts soon, such as the Compaq Airlife 100 and Lenovo Skylight. But what if you could just snap your phone into a dock to turn it into a smartbook?

NAK Design has drawn up some images of a concept device that would let you do just that. The WOOGA, which stands for Work or Game, features a slot for a smartphone, complete with video game controllers on the left and right side, making it easy to treat your iPhone, Android device, or other smartphone as if it were a Gameboy or PSP. There’s also a QWERTY keyboard to make typing easier. And the WOOGA also has its own battery, although it’s not clear if that would just power the base or if it would also provide extra battery life for your phone. Since this is just a design concept for now, I’ll go out on a limb and guess it’s the latter.

The top of the unit would feature a swivel so that you could fold the display down over the keyboard and operate the gaming controls like the same way you would any other handheld video game system.

The biggest problem I see with the design is that the smartphone wouldn’t sit flush with the base. I suppose this is so that the WOOGA dock doesn’t take up too much space, and so that it could be used with several different phone models regardless of size. But it looks a little clunky.

Of course, there’s no guarantee this thing will ever see the light of day. But it’s an interesting concept.