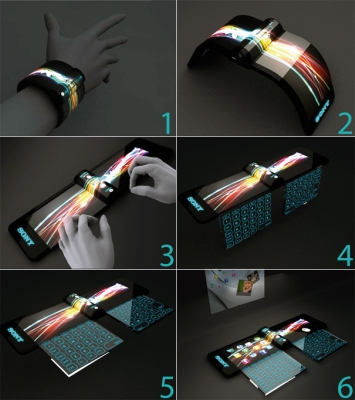 I like mobile technology. You probably guessed that since I run a blog about netbooks and mobile computers and another about smartphone apps. But as much as I like to carry a smartphone or PDA in my pocket and a netbook in my backpack, I’m not entirely sold on the idea of wearable computers yet. Call me crazy, but I never saw the appeal of the Dick Tracy watch. It just looked too big and clunky to be comfortably worn on your wrist.

But that doesn’t mean there aren’t plenty of attempts underway to make wristwatch phones or computers. But some folks aren’t happy looking at watches designed using today’s technology. Designer Hiromi Kiriki has created some concept photos for a futuristic computer that you can wear on your wrist or place on table and use a slide-out keyboard to get some serious work done.

He envisions the device as something that could be available by 2020, but who knows? Maybe we could see this sort of computer become reality much sooner. The question is — would you wear it? Incidentally, while the concept images have the Sony brand name on them, I don’t think this is something Sony is actually working on. If anything, the imagery seems more reminiscent of the Asus WaveFace concept shown off at CES earlier this year.