AMD’s Ryzen Embedded line of processors are based on the same architecture as the Ryzen chips that power laptops and desktops. But they’re designed for embedded systems which generally means they can use less power and generate less heat than more powerful counterparts: AMD says Ryzen Embedded V1000 series chips (PDF) have TDP ratings ranging from 12 watts to 54 watts.

Now it looks like one Ryzen Embedded system announced last year is one step closed to general availability though. The UDOO BOLT single-board computer aimed at the maker crowd should start shipping by the end of March. 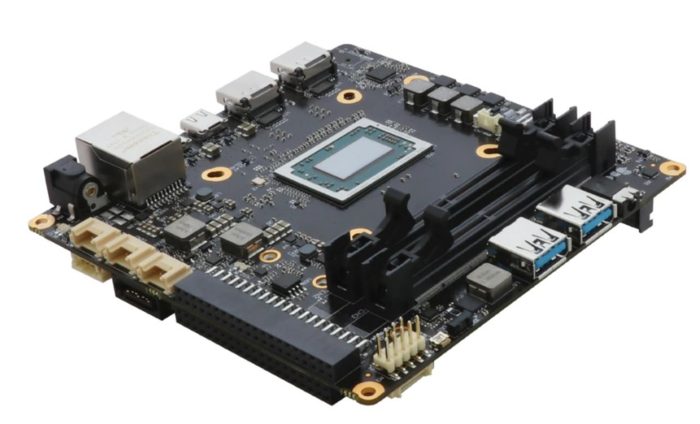 UDOO says the system can power up to four displays with resolutions up to 4K thanks to its dual HDMI 2.0 ports and dual USB 3.1 Type-C ports. There are also two USB 3.0 Type-A ports, and the system features Gigabit Ethernet, a headset jack, an IR receiver, Arduino-compatible pins, and other I/O connectors.

It comes with 32GB of eMMC 5.0 storage and supports SATA hard drives or SSDs as well as M.2 PCIe NVMe solid state storage. And there are two SODIMM slots for up to 32GB of DDR4-2400 RAM.

The developers of the UDOO BOLT raised over $600 thousand through a Kickstarter campaign that launched in May, 2018 with the goal of shipping the device to backers by December of that year.

That didn’t happen, but in an update posted to the campaign a few days ago, UDOO notes that the system has passed all necessary certification tests, and the first 300 units should ship to early bird backers of the campaign within days.

If you were one of the later backers you may have to wait a little longer to receive your UDOO BOLT, and it’s not clear at this point if or when UDOO will be ready to ship its most powerful computers to date to new customers.

In the meantime, you can currently find some of UDOO’s older, less powerful devices at the UDOO Shop, including the UDOO X86 (with an Intel Celeron or Pentium Braswell chip), the UDOO Dual or Quad (with NXP i.MX 6 chips) or UDOO Neo (with single-core NXP i.MX 6 chips).