Modern computers can do an awful lot of things. You can write a novel, or read one. You can listen to music, compose music, or create a music video. And you can waste countless hours watching cat videos on YouTube. All of which is to say that computers are amazing productivity tools… and time wasters.

Sometimes you don’t want both of those things in the same device though — which was apparently the inspiration behind the SPUDwrite, a DIY device that’s designed for writing, reading, and not much else.

It has an E Ink screen and a keyboard, which isn’t entirely unheard of. But the SPUDwrite goes a bit further than E Ink typewriters like the Freewrite Smart Typerwiter and Freewrite Traveler. 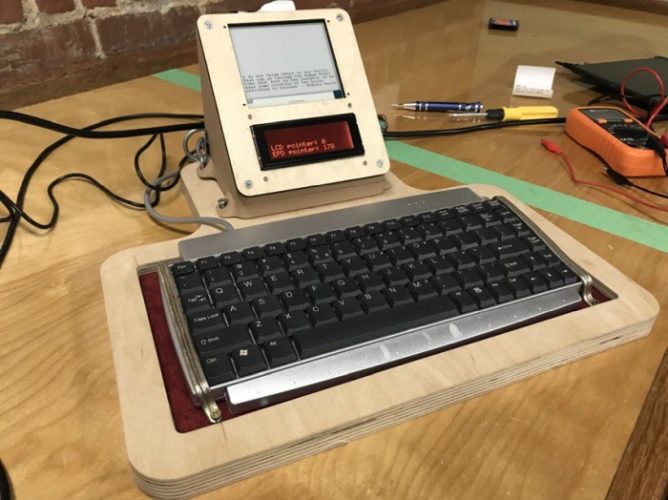 The SPUD in SPUDwrite stands for Single Purpose User Device, since the gadget is meant for writing alone. But it actually has a couple of unusual features.

For example, the E Ink display offers a high-contrast, paper-like viewing surface. But it has a slow screen refresh rate, so fast typists may not see the characters they’re typing immediately. So the developer added a small orange character LCD screen that shows what you’re typing in near real-time.

When you’ve finished your writing session you can save your file to an SD card and transfer it to a computer for printing, sharing, or archiving. But if you want to cut your PC out of the picture entirely, there’s another option: you can print from the SPUDwrite.

It has the kind of thermal printer that you’d normally use with a cash register to print receipts. Is it the most practical solution for printing your work? Probably not. But it is kind of cool that you can sit down, do some writing, save a digital file and even get a hard copy all on the same device… without turning on a traditional computer and getting distracted by social message alerts, games, videos, all the other things trying to grab your attention these days.

The SPUDwrite is powered by an 84 MHz STM32F401 ARM Cortex-M4 processor and it runs software based on ARM’s Mbed operating system.

Developer Lucian showed off the SPUDwrite during a Adafruit show and tell live event on YouTube. The device makes its first appearance at about 17:10 in the video.

via Adafruit Blog and Boing Boing