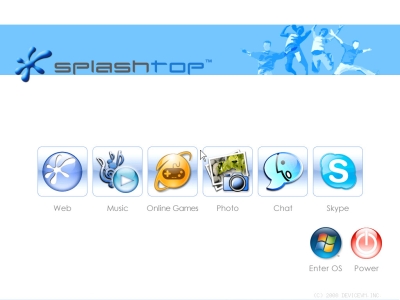 DeviceVM’s Splashtop software provides an “instant on” environment that lets you start using a computer without waiting for a full desktop operating system to load. Basically, Splashtop is a stripped down version of Linux that runs a handful of programs including Firefox and Pidgin to let you surf the web and chat with your friends 10-20 seconds after hitting the power button instead of waiting for Windows to boot.

The company has already reached deals with a handful of PC makers including Lenovo to offer the software on netbooks and other computers. Now it looks like Splashtop is also coming to the Acer AspireRevo nettop and Sony VAIO NW notebook line.

Honestly, it doesn’t take that much longer to load Windows or a full Linux distribution like Ubuntu on these computers, so I’m not sure there’s a great demand for “instant on” software. But maybe I’m in the minority here. Have you used Splashtop or another quick start software application? What do you think of it? Let us know int he comments.