Samsung plans to launch a new line of 11.6 inch tablets running Windows 8 later this year. You’ll also be able to use the Samsung Series 5 Hybrid computers as laptops by sliding the tablets into keyboard docking stations. There’s a magnetic locking mechanism to hold the two pieces together. 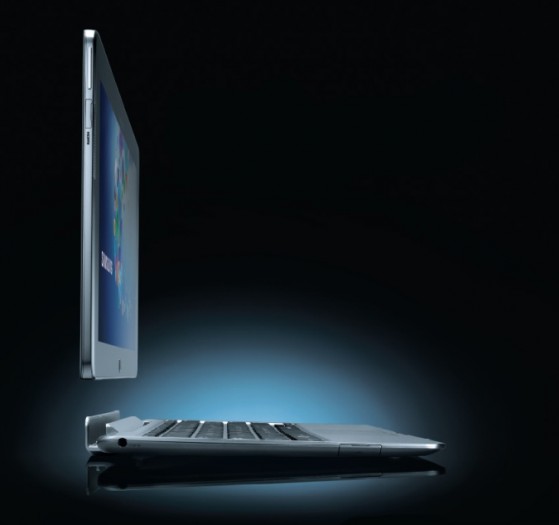 Laptop Magazine reports that there will be two different versions of the Series 5 Hybrid. One will have a low power, 2-watt Intel Atom processor that’s designed for smartphones and low power tablets. A second model will have a higher performance Intel ULV processor and a high resolution 1920 x 1080 pixel display.

The tablets will measure 0.35 inches thick and weigh about 1.5 pounds, feature front and rear cameras, HDMI, USB, and microSD card slots as well as a SIM card slot on models with mobile broadband.

Samsung also includes a stylus — and unlike the Samsung Series 7 Slate PC which uses a digital pen but doesn’t include a space in the tablet to store the stylus, the Series 5 Hybrid has a stylus dock built right into the case.

There’s no word on how much the new tablets will cost, but they should be available this fall when Microsoft launches Windows 8.

The Series 5 Hybrid will have some company in the convertible Windows 8 tablet space. Asus, Acer, and MSI have also introduced several Windows 8 tablets with detachable keyboards.