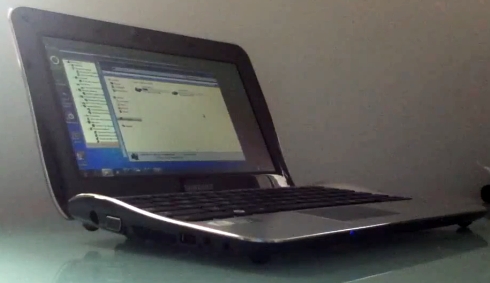 If you’re only going to watch one video of something being taken out of a box today, may I humbly suggest you make it this one? The folks at Samsung sent me the new NF310 laptop to review this week, and after the break you can check out my unboxing and first look video.

On paper, the Samsung NF310 is a pretty compelling machine. For $399 you get a 1.5GHz Intel Atom N550 dual core processor and a 10 inch, 1366 x 768 pixel matte display. It has 1GB of RAM, a 250GB hard drive, 802.11b/g/n WiFi, and Bluetooth 3.0. Unfortunately while some early store listings suggested the netbook would have NVIDIA graphics, it actually ships with integrated Intel GMA 3150 graphics.

But the specs only tell part of the story. The Samsung NF310 also has a distinct new design, which I suspect is going to be a love-it-or-hate-it factor for some folks.

When I first saw the new design last month, I was kind of underwhelmed. Sure, the wavy edges look interesting, but they serve no real purpose and just make the laptop a little wider than it would otherwise be. But I have to say, while the curvy design looks a bit silly on the Samsung NF210 (a similar mini-laptop with a single core processor and 1024 x 600 pixel screen), Samsung has really classed things up a bit for the NF310 by giving the laptop a more metallic paint job which actually gives the keyboard a bit of a MacBook-style patina.

The touchpad also has a very nice texture and feels great under your fingertip. While there’s only one touchpad button, there’s a clear marker in the center and it’s almost as easyto register right and left clicks as it would have been with two distinct buttons.

The speakers are nice and loud, and the high resolution display is nice and bright. I’ll be putting the netbook through the ringer over the next few days and I’ll have details about its performance to share soon. In the meantime, you can check out my first look video after the break.