Samsung is updating its line of smartwatches, fitness trackers, and smart earbuds. During an event at the IFA show in Berlin, the company confirmed the launch of a new waterproof fitness tracker called the Gear Fit 2 Pro, and also introduced the new Gear Sport smartwatch and updated Gear IconX wireless earbuds with support for Samsung’s Bixby voice assistant. 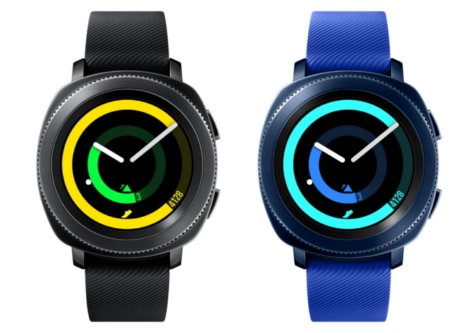 This new smartwatch features a 1.2 inch circular AMOLED display and a bezel that you can rotate to interact with the watch, much like the bezel on Samsung’s Gear S3.

But the new model is made for durability, with a MIL-STD-810G tested case, a Gorilla Glass 3 screen, and water resistance up to 5 atmospheres.

The watch is available in black or blue, supports 0mm straps, and features a 1 GHz dual-core processor, 768MB of RAM, 4GB of storage, a 360 x 360 pixel display, and wireless charging support.

It runs Samsung’s Tizen-based operating system and supports 802.11b/g/n WiFi, Bluetooth 4.2, GPS, and NFC. The watch has a 300 mAh battery and it’s compatible with Android and iOS phones.

The updated activity tracker has a 1.5 inch curved Super AMOLED display with a resolution of 216 x 432 pixels and a Gorilla Glass 3 cover. 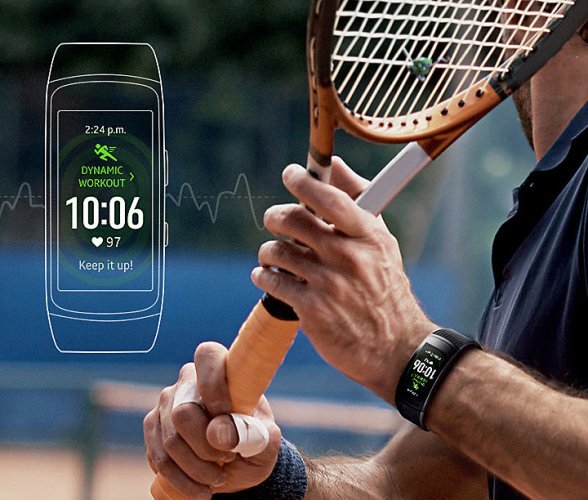 It comes in small and large sizes and black or red colors. The Gear Fit2 Pro also has a 1 GHz dual-core processor and Tizen-based OS. It features 512MB of RAM and 4GB of storage, 802.11b/g/n WiFi, Bluetooth, and GPS, and has a 200 mAh battery.

Like the Gear Sport, this device is MIL-STD-810G tested and water resistant up to 5 ATM, which makes it an activity tracker you can wear in a swimming pool, unlike its predecessor.

Samsung’s new truly wireless earbuds offer up to 5 hours of battery life while playing music when paired with a phone via Bluetooth, or up to 7 hours if you’re just using the earbuds on your own — which you might actually want to do, since they have 4GB of built-in storage that you can use to store music.

There’s also a “Running Coach” feature that can be activated even when you don’t have your phone.

When the IconX 2018 edition earbuds are paired with a Galaxy S8 or newer phone, you canalso tap and hold the earbuds to interact with Samsung’s Bixby voice service.

In addition to the 82 mAh built-in batteries in the earbuds, the new Gear IconX earbuds come with a charging case that features  340 mAh battery, slowing you to recharge the earbuds on the go.

They come in black, gray, or pink color options.

Samsung hasn’t unveiled pricing for any of its new wearables yet.