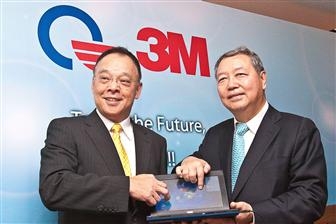 While it’s not a hard and fast rule, I’ve gotten kind of used to the fact that most tablets, smartphones, and other devices with touchscreen displays released over the past few years come in one of two varieties. Either you have a touchscreen that recognizes finger input (capacitive), or stylus input (resistive). You rarely get both (although resistive displays which are designed for a stylus can recognize fingertips if you press hard enough).

Of course, there are other technologies out there, such as active digitizers which require a special pen to work, but which are pressure-sensitive and highly accurate for writing and drawing. But basically most relatively affordable tablets and smartphones available today have capacitive or resistive displays.

Quanta and 3M are working on a new technology that could shake things up a bit. They’re working together to develop a new kind of touchscreen using what they call DST, or dispersive signal technology. These screens would have an extra layer of glass with sensors in it that would recognize both pen and finger touches by detecting the location of the shock generated by your tap.

Quanta says the technology could lead to more sensitive touchscreens than we see today. But there’s no word on the pricing for the new DST touchscreens which could be available by the end of the year.

One reply on “Quanta and 3M developing touchscreens for finger, stylus input”