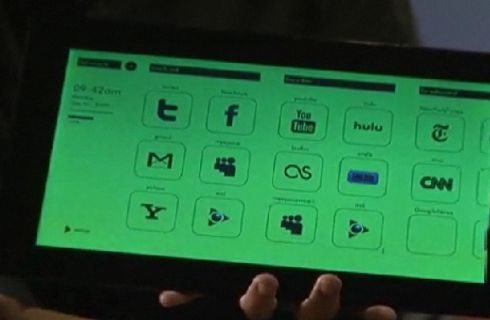 Arrington had a falling out with Fusion Garage recently, the company that developed the device’s operating system and which founder Chandra Rathakrishnan claims was behind all of the work in designing the hardware and sourcing its manufacture by OEMs. While Arrington says he’s going to sue over the death of the so-called CrunchPad, Rathakrishnan and company are moving ahead with the tablet under a new name: joojoo.

The joojoo will  weigh 2.4 pounds, feature a 12.1 inch, capacitative touchscreen display, and a custom interface designed for interacting with web services. The OS boots in about 9 seconds, and features shortcuts on the home screen for a number of web services including Gmail, Twitter, Facebook, and CNN. You can scroll across the screen to unveil additional items. The joojoo will feature caching capabilities that will let you do things like compose emails while offline.

The device features a 4GB SSD, although the idea is that most of your user data will be stored online in the cloud. It has a 5 hour battery and support WiFi. There will be an on-screen software keyboard for entering text, but no physical keyboard.

You’ll be able to order the joojoo starting Friday, December 11th and it will ship in 8-10 weeks. While Fusion Garage’s operating system sounds an awful lot like the upcoming Google Chrome OS, which will also be web-only, the joojoo has one major advantage: It’s scheduled to ship soon while no Chrome OS devices are expected to be available until the second half of 2010.

Rathakrishnan says he’s comfortable with the $499 price, as there are currently no other products with 12.1 inch capacitive touchscreen displays at that price point. But he’s comparing the joojoo to an iPhone, which functions as a phone, which the joojoo does not, and netbooks, which have keyboards, which the joojoo does not. He suggests that full-sized tablets tend to run over $1500, which has been true in the past. But those tablets also had substantially more than 4GB of storage and had faster-than-Atom processors. Last I’d heard, the joojoo was running a standard Intel Atom CPU.

So there are a few remaining questions: at $499 are you still interested? And without Michael Arrington and TechCrunch promoting the joojoo, does it stand a chance?