The OnePlus Nord 10 5G is a mid-range smartphone with some premium specs including a 90 Hz display, 5G support, and 30 watt fast charging. It went on sale in Europe and the UK last fall, and this month it’s coming to the United States.

And if you’re looking for a cheaper option, T-Mobile is also adding the OnePlus Nord N100 to its lineup for $180. Both phones will be available in the US starting January 15. 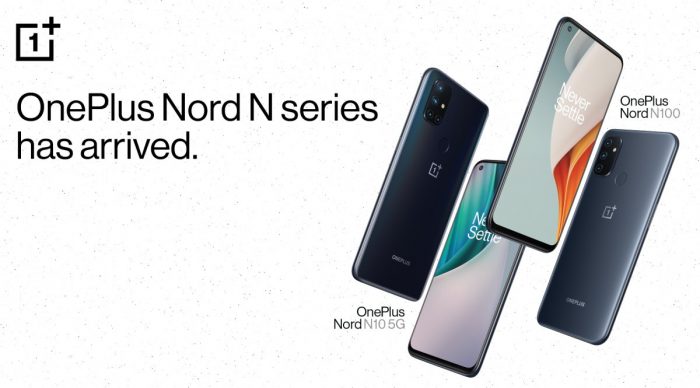 The cheaper phone features a 6.52 inch, 1600 x 720 pixel IPS LCD display with a 90Hz refresh rate, which is a rarity in a phone this cheap. The OnePlus Nord N100 also has 4GB of LPDDR4x RAM and 64GB of UFS 2.1 storage. Those features may not exactly be top of the line, but they’re a bit more than I would expect from a sub-$200 smartphone.

Other features include a Qualcomm Snapdragon 460 processor, an 8MP front-facing camera and three rear cameras: 13MP primary, 2MP depth, and 2MP macro. The Nord N100 also has a 5,000 mAh battery, 18W fast charging support, a microSD card reader (with support for cards up to 256GB) and a fingerprint reader on the back of the phone.

This phone has a 16MP front-facing camera and four rear cameras:

In addition to having a faster processor, more memory and storage, and better cameras, the Nord N10 5G supports NFC and of course, T-Mobile’s 5G network.

If you want bleeding edge performance, wireless charging, or a water resistance rating, neither of these phones offer those features. But one thing they do both have? Headphone jacks.