But desktop email clients aren’t as popular as they once were, with many email users just logging into Gmail, Yahoo, or Hotmail using the web interface.

So it’s probably not a huge shock to see that Mozilla has decided to focus on web and mobile projects such as the Firefox browser and Firefox OS in the future and decrease emphasis on Thunderbird. 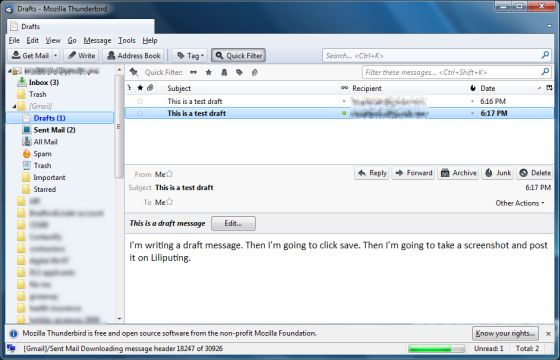 TechCrunch obtained a memo to Mozilla staff explaining the decision. A formal announcement is expected Monday.

Mozilla isn’t necessarily killing off Thunderbird altogether. The software will still be available for download, and it sounds like the developers are looking for a way to continue providing security and stability updates while devoting fewer resources to the project. But it sounds like we should expect any major new features for Thunderbird… at least not from Mozilla.

As open source software, it’s possible that Mozilla could encourage greater community development, or even hand over governance of the project to another organization. I could imagine Canonical, the Linux Foundation, or GNOME or KDE taking over development and keeping the software alive. But I could also see Thunderbird fading slowly into oblivion over the years as it becomes slowly obsolete.

Personally, it’s been years since I’ve used a desktop email client or calendar app. But I’m also always a little uncomfortable relying solely on web apps. If your web mail provider decides to change the user interface or shut down their service altogether, there’s little you can do about it. But if you use a desktop app you have more control over your saved messages, notification settings, and layout.

What do you use for email? Are you disappointed in Mozilla’s decision, or are you surprised to learn that Thunderbird was still under active development at all?