Rikomagic sent me a demo unit to test, and now that I’m done with the MK704 it’s time for a giveaway. Read on to find out how you can get a chance to win this little keyboard/remote. 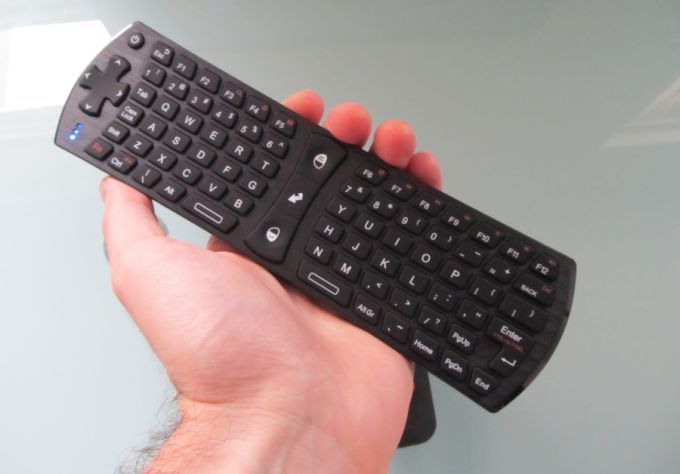 The MK704 normally sells for between $20 and $30. You can pick one up from Amazon, AliExpress, or DealExtreme, among other places.

It’s not the simplest remote control or keyboard to use… but it is rather versatile if you’re trying to run apps that don’t respond well to remotes that have just a few buttons.

With a full QWERTY keyboard complete with Fn keys, arrow keys, and shortcuts for media playback, you can do just about anything with the MK704 that you could with a full-sized keyboard. You’ll just probably do it more slowly since you’ll probably end up typing with two thumbs instead of all 10 fingers.

You also have to hold down two keys at once do access functions like the Windows Start button or the Android home button, which can be a bit tedious at times.

There’s also an air mouse mode that lets you wave around an on-screen cursor and click the left and right buttons. This mode comes in handy when you’re using apps that weren’t really designed for use with arrow keys and play/pause buttons.

OK, enough about the remote. What you really want to know is how you can get one for free. Here’s how to enter:

That’s the large print. Here’s the same sized (but not bold-faced) print:

Thanks again to Rikomagic for providing us with this demo unit! You can learn a bit more about it in the video below.