A growing number of PCs, phones, and other gadgets can support microSDXC cards with capacities as high as 2TB. There’s just one problem: nobody actually makes 2TB microSD cards yet.

But we’re getting closer. More than two years after the first 1TB cards began shipping, Micron has unveiled the first 1.5TB microSDXC card. 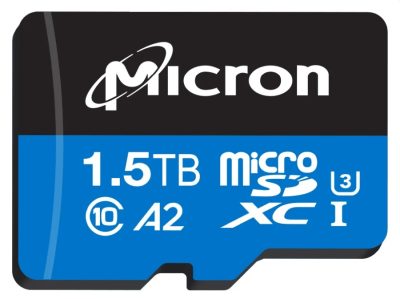 The new Micron i400 is the world’s first microSD card to use 176-layer 3D NAND storage technology for increased storage density, allowing Micron to offer 256GB, 512G, or 1TB versions of the card… plus, for the first time, a 1.5TB version.

The removable storage card comes from Micron’s industrial division and it’s designed for use in video security systems. Micron says you can store up to 120 days (four months) of video on a single 1.5TB card, and the storage cards are fast enough to save 4K video recordings while processing “up to eight AI events per second, such as object detection and classification like license plate or facial recognition.”

Micron says the cards should also be long-lived: you should be able to record video continuously 24-hours a day for up to 5 years and the cards are shock-proof, water-proof, and able to function at temperatures as low as -25 degrees Celsius or as high as 85 degrees Celsius (-13 to 185 degrees Fahrenheit).

All of which is to say that while Micron hasn’t announced price tags for its new i400 microSDXC cards yet, I wouldn’t expect them to be cheap… particularly if you want the top-of-the-line 1.5TB model. But this could eventually pave the way for more consumer-friendly cards with more than 1TB of storage.

via The Register and Micron (PDF)