Chinese device maker MeegoPad’s latest tiny computer is a PC stick with an Intel Atom x5-Z8350 quad-core processor, 4GB of RAM, and 32GB of storage, making it one of the more powerful systems in its category.

But what makes the MeegoPad T08 unusual is that it’s one of the first PC sticks to feature a USB Type-C port. Among other things, that makes it possible to connect up to two displays to this tiny PC-on-a-stick at the same time. 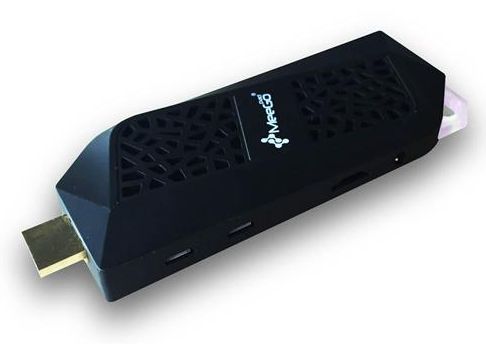 That’s because, like most PC sticks, the MeegoPad T08 has an HDMI 1.4 port that allows you to plug the stick directly into the HDMI port on a TV or monitor. But it also has a USB 3.1 Type-C port that supports DisplayPort technology, allowing you to run a cable to a second display.

In addition to that USB-C port, the system has two full-sized USB 2.0 ports and a micro USB 2.0 port, which is basically the power jack for this little computer.

Other features include 802.11a/b/g/n WiFi and Bluetooth 4.0 and a microSD card slot for up to 128GB of removable storage. There’s also a power button, and a small fan inside the case to help the system from overheating while in use.

While MeegoPad has been known to sell PC sticks with unlicensed versions of Windows in the past, Geekbuying is selling the new MeegoPad T08 for $155, and the retailer says it comes with a licensed copy of Windows 10 pre-installed.

It’s also available from several AliExpress sellers for prices ranging from $130 to $175.

One mystery? I’m not sure why the new PC stick shares a name with a different MeegoPad product that was unveiled more than a year ago.