The Lenovo IdeaPad 5i Gaming Chromebook is a notebook with a 16 inch, 2560 x 1600 pixel, 120 Hz display, a keyboard with RGB LED backlit keys and quad speakers. In other words, it has the look of a gaming laptop… but not necessarily the hardware or the price tag.

That’s because it’s designed for cloud gaming, which means a decent display, keyboard, and internet connection are more important than a bleeding edge CPU or GPU. When Lenovo first unveiled its Gaming Chromebook earlier this week the company said it would sell for $599 and up. But it turns out that the street price is actually much lower (at least so far). Walmart is selling the Ideapad 5i Gaming Chromebook for $399. 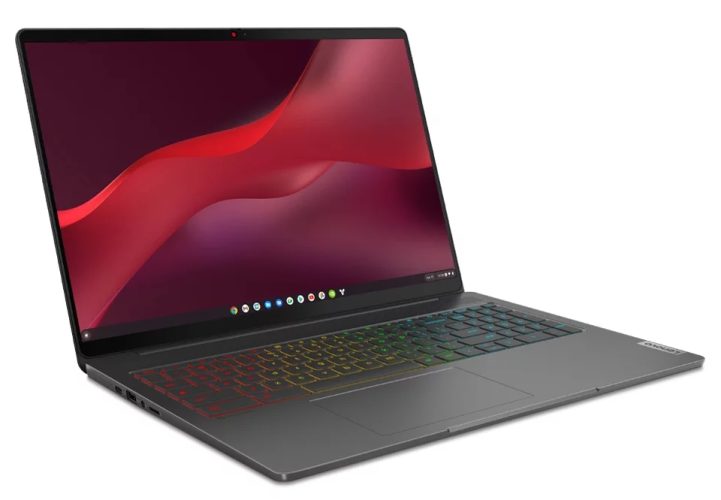 For that price you not only get a Chrome OS laptop with 8GB of LPDDR4x memory, 128GB of eMMC storage, a 71 Wh battery, and support for WiFi 6E and Bluetooth 5. Walmart notes that the Chromebook is also eligible for a promotion that lets customers pick up a free 3-month subscription to NVIDIA GeForce Now Ultimate.

You can also use the Chromebook to stream games from other game streaming services including Amazon’s Luna, Microsoft’s Xbox Cloud Gaming, or Google’s Stadia (at least until that last one shuts down in January).

While the entry-level model of the Lenovo Ideapad 5i Gaming Chromebook sold by Walmart has just an Intel Core i3 processor and 128GB of storage, Lenovo has indicated that other versions of the laptop will be available with up to an Intel Core i5-1235U processor and up to 512GB of PCIe solid state storage thanks to an M.2 2242 slot.

Lenovo isn’t the only company to launch a gaming Chromebook this month. Asus and Acer have also introduced their own models. Like Lenovo’s gaming Chromebook, those laptops feature high-resolution displays with high screen refresh rates, keyboards made for gaming, and 12th-gen Intel Core processors, but no discrete graphics.