Intel may be preparing to launch its third set of processors in the span of just a few months.

According to a leaked product roadmap published by Gamers Nexus, Intel’s low-power Gemini Lake chips will be introduced in late October or early November. 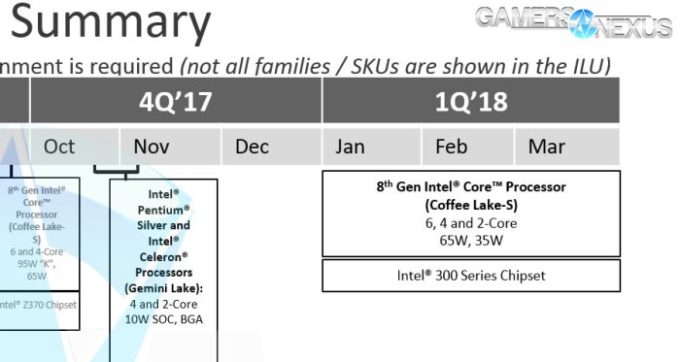 Gemini Lake chips are expected to include dual-core and quad-core processors that will be sold under the Celeron and Pentium Silver brands.

While Intel will likely offer models with 6 watt Gemini Lake chips for use in laptops and convertible tablets, the roadmap in question only seems to focus on the desktop variants, which are 10 watt chips that will include the Celeron J4005, J4105, and Pentium J5005 processors.

These will be the follow-up to Intel’s current-gen “Apollo Lake” processors and, among other things, they’re expected offer up to 15 percent better performance, more cache memory, and native support for HDMI 2.0.

Intel is also expected to launch a second round of Coffee-Lake S chips in the first quarter of 2018. These will include 35 watt and 65 watt chips with between 2 and 6 CPU cores and support for the Intel 300 Series chipset.

You can find more details at Gamers Nexus.