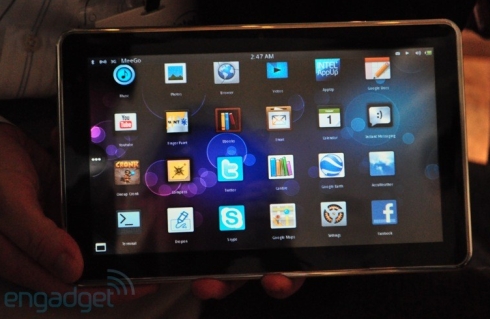 While a lot of the tablets we’ve seen introduced in 2010 have been powered by ARM-based processors, Intel wants in on the action — and the company is showing off a ton of tablets at Computex. That includes machines from Hanvon, Malta, Wistron, FIC, and others.

What’s interesting is that we’re not just talking about Windows tablets anymore. There was a time when if your touchscreen tablet came with an ARM-based processor it probably ran Linux, Google Android, or Apple’s iPhone OS. Tablets with Intel chips ran Windows XP or Windows 7. But now Intel is starting to demonstrate tablets running the MeeGo Linux environment.

I have to say, I’m pretty excited about the prospect of tablets running MeeGo. While the mobile operating system works quite nicely on a netbook, the user interface really looks like it was designed to be touched. It has nice big icons and every app launches in full screen the way it would on a smartphone.

While several tech bloggers spotted a Wistron tablet running MeeGo tucked away behind glass at the Intel booth at Computex, the folks at Engadget got to spend some hands-on time with another MeeGo tablet. The Quanta Redvale tablet has an Intel Atom Moorestown processor and runs MeeGo Linux.

The tablet isn’t slated to hit the market until 2011, and the software is still in “pre-alpha,” but Engadget reports it’s very slick. And interestingly, judging by the Engadget photo gallery, the UI doesn’t actually look all that much like the netbook version of Moblin.

While Quanta and Wistron aren’t exactly household names, these are companies that manufacturer products which get sold under big brand names in the US and elsewhere. So if you can’t get excited about the prospect of a Quanta or Wistron tablet running MeeGo, how about an Acer tablet or netbook? Because Acer CEO Gianfranco Lanci says his company plans to use MeeGo on upcoming tablets and netbooks.