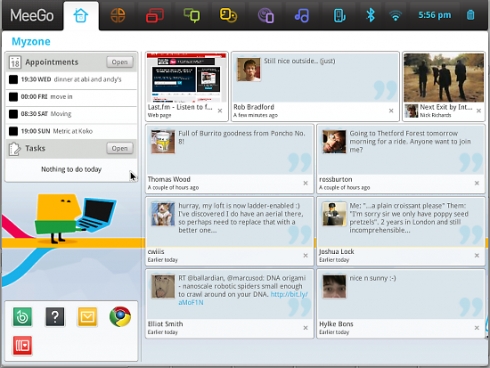 First, it’s fast. I mean, really, really fast. I tested MeeGo on an MSI Wind U135 with an Intel Atom N450 processor. It’s not the fastest machine in the world, but it booted the operating system from a USB flash drive in just 25 seconds and switching between windows was ridiculously fast — although it sometimes took a few seconds to actually launch an application. I should point out that I was running MeeGo from a USB flash drive. It’s possible the OS could be even more responsive if you install it to your computer’s hard drive.

Update: After installing MeeGo to the hard drive of an Asus Eee PC 1000H, that laptop took about 42 seconds to boot. The reason it’s slower is that it has to load user data and you have to enter a password to login.

The other thing that makes MeeGo ideal for netbooks is that the OS has been designed for devices with small screens. There’s no taskbar permanently taking up space at the bottom of the screen. When you load an app, it runs in full screen. In order to get the menu back, just move your cursor to the top of the screen and tap to bring it up.

MeeGo also has a nice home screen that’s designed to give you a bunch of information the second you turn on your netbook. You can see a list of upcoming appointments and tasks, information from your social network contacts, web pages that are open in your browser, and other information all at a glance. There are also icons on the home screen to launch frequently used apps without visiting the apps menu.

The biggest problem with MeeGo at this point is that there simply aren’t a lot of third party apps designed to work with the OS yet. When I visited the MeeGo Garage, I was completely underwhelmed by the number of apps available to install. Given that there are thousands of excellent Linux apps out there, it would be nice if more of them were currently available for this platform. But if MeeGo takes off in the marketplace, I suspect we’ll start to see more existing apps optimized for MeeGo and new apps developed for the operating system.

Another problem I had was actually downloading MeeGo v1.0. There are two download links on the MeeGo home page. The one that says Google Chrome Browser failed on me repeatedly. Instead I downloaded MeeGo v1.0 for Netbooks which is described as the core Software Platform & Netbook User Experience release. As it turned out, the Google Chrome browser was included. Go figure.

Once you download the disk image, you’ll want to load it on a USB flash drive to boot on your netbook. MeeGo has provided instructions for doing this on a Windows, Linux, or Mac computer.

I’m not ready to throw Windows off my netbook just yet. But MeeGo is looking pretty good so far. The MeeGo project was formed by the merger of the Moblin and Maemo projects, and while MeeGo looks a lot like Moblin, the OS is much more polished and generally a lot snappier than the last version of Moblin I tried on an Intel Atom powered netbook.

You can check out my first look video after the break. You can also find more screenshots at the MeeGo web site.

Update: Some folks have asked how MeeGo works on a touchscreen device. Turns out that while there is a build for the Nokia N900 with touchscreen support, there are no touchscreen drivers fro the netbook version of MeeGo yet. I tested it on a Lenovo IdeaPad S10-3t and while the touchpad worked just fine, touching the screen did nothing at all.