Intel is expanding its 11th-gen Core processor lineup with a new line of 45-watt chips designed for gaming laptops and mobile workstations.

The new Intel Tiger Lake-H processors are 10nm chips with 6 to 8 CPU cores, support for turbo boost speeds as high as 5 GHz, and built-in support for technologies including Thunderbolt 4, WiFi 6E, and PCIe Gen 4.

Over 80 laptops featuring Tiger Lake-H chips are expected to hit the streets in the coming months, with pre-orders for some models starting today and the first laptops beginning to ship by May 18th. 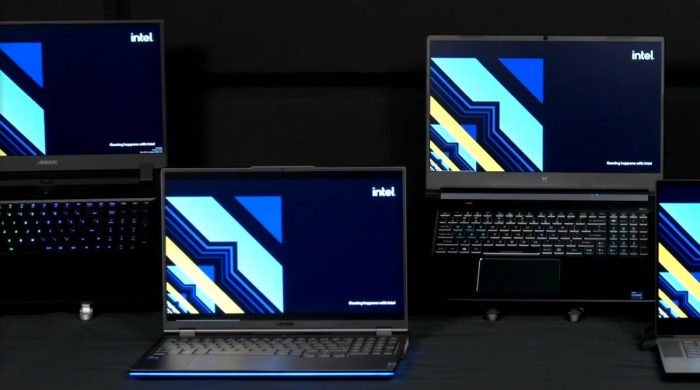 Many models are expected to feature thinner designs, slimmer bezels, and newer technologies than you’d have found in a high-performance laptop from a few years ago. Intel highlighted features like 16 inch displays, slim bezels, and screen refresh rates up to 360 Hz.

One thing to keep in mind is that while Intel is promising a big boost in CPU performance over previous-gen chips combined with the company’s latest integrated graphics technology, for the most part Tiger Lake-H processors are designed to be used with third-party discrete GPUs. 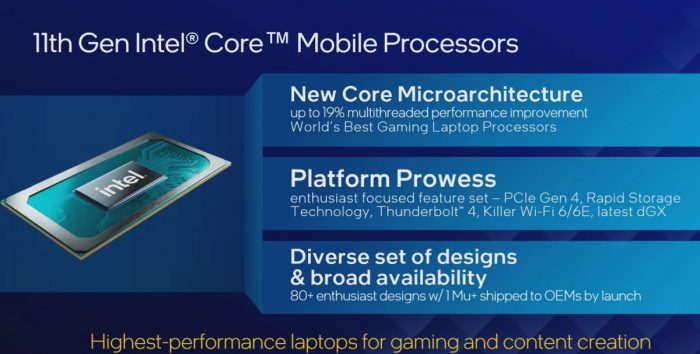 Intel says Tiger Lake-H integrated graphics should still be powerful enough to drive multiple 4K displays at once, but if you want to use these chips for gaming or content creation, you’re probably going to want a discrete GPU, and Intel expects many of the first notebooks powered by these chips to feature NVIDIA GeForce RTX 30 Series graphics.

Here’s an overview of the Intel Tiger Lake-H lineup for consumer PCs:

All of these chips feature Intel UHD integrated graphics with a base frequency of 350 Hz and a top speed of 1.45 GHz, and they all support DDR4-3200 memory.

While they all have a default TDP of 45 watts, most chips can also be underclocked to run at 35 watts in order to prioritize low power consumption and long battery life, while the Core i9-11980HK can be overclocked to run at 65 watts. It’s the only chip that’s fully unlocked with support for per-core voltage tuning, allowing enthusiasts to try to squeeze more performance out of it.

The new chips come on the heels of the Intel Tiger Lake-H35 processors that launched earlier this year. Those chips, which ran at up to 35 watts, were basically just overclocked Tiger Lake-U chips that still topped out at 4 cores and 8 threads.

Intel’s new chips should put the company in a better position to compete with AMD’s Ryzen 5000H series, and at least in a handful of cherry-picked benchmarks, Intel seems pretty confident that its new chips are competitive against AMD’s latest processors as well as against its own previous-gen chips.

It’ll be interesting to see how things play out in real-world tests once reviewers start to get their hands on systems powered by Intel’s latest processors.