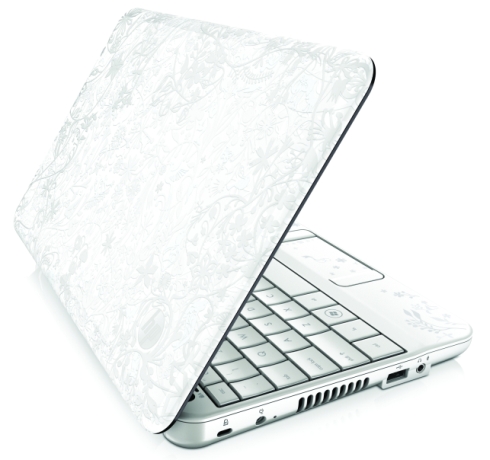 HP is partnering with another well known designer on a customized netbook. The company first took this approach with the HP Mini 1000 Vivienne Tam Edition, which was launched late last year. This time, it’s designer Tord Boontje‘s turn to slap a few designer touches on an HP Mini 110.

The HP Mini 110 Tord Boontje edition has a lid designed by Boontje, with ink layered into the netbook’s polycarbonate shell. HP says it gives the design a three dimensional effect and that you’ll be able to find hidden patterns when you look at the laptop from different angles.

The designer edition netbook will also come with 15 custom wallpapers designed by Tord Boontje. Now, here’s the interesting part about that: The laptop will ship with Windows 7 Starter Edition. And while Microsoft prevents users (or HP) from changing the desktop background in the low cost version of the operating system, HP has partnered with StarDock to load the MyColors software on the designer netbook so that users can select the special backgrounds.

The netbook will start at $399, which makes this designer edition seem much more approachable than the Vivienne Tam Edition, which started at $699.99. There’s no word yet on how much the second-generation Vivienne Tam Edition introduced this weekend will run.

Update: Engadget has some hands-on photos that really do better justice to the “HP Imprint 3D” lid design than the press shots.