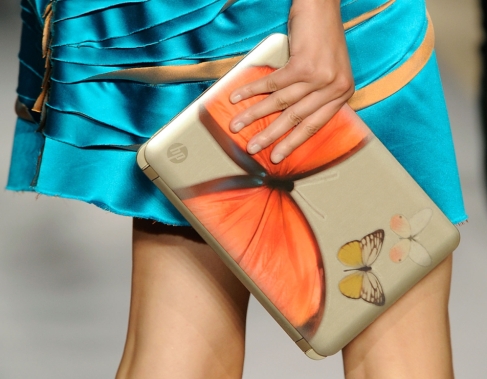 HP is working with fashion designer Vivienne Tam on a second-generation “Digital Clutch” netbook. The first Vivienne Tam Edition netbook was based on the HP Mini 1000 and was released last year for a somewhat ridiculously high price of $699, or about $300 more than the cost of a basic HP Mini 1000 with a black lid. But apparently the designer edition must have hit a nerve, because HP is giving it another go.

At New York Fashion Week the company announced a new Digital Clutch as part of Tam’s 2010 Spring collection. The new netbook should hit the streets in next Spring. The new design is based on a calssic Chinese love story “Butterfly Lovers,” and features, you gussed it, a butterfly motif. The design is actually quite nice, and maybe it’s just me, but it seems a little less girly than the first version. I might actually be willing to be seen with this netbook in public.

There’s no information available about the hardware beneath the classy lid, but if I had to guess I’d say the netbook was based on an HP Mini 110 netbook.

You can find more photos of the new Digital Clutch at Chip Chick.