The MK802 Mini PC is an inexpensive computer that’s about the size of a large USB flash drive. It ships with Google Android 4.0 software, but as we’ve already seen it can also run Ubuntu, Puppy, and other Linux-based operating systems.

While the hardware can handle 1080p screen resolutions, out of the box the MK802 version of Android defaults to 720p. But the folks at the Miniand forums have figured out a way to enable support for higher resolution displays — at least when you’re using Ubuntu. 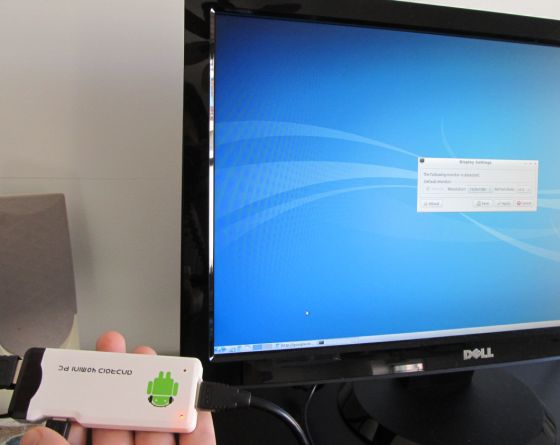 You can pick one up for well under $100 from AliExpress, eBay, or AsiaPads.

The simplest way to run Ubuntu is to load it on a microSD card and boot from that card.

Eventually Miniand plans to incorporate the 1080p fix into future disk images that you can load onto a microSD card. But for now, here’s how to use one of the existing images to run Ubuntu Linux at 1080p on the MK802 Mini PC.

Download the one you plan to use to a folder on your computer.

2. Write your image to a 4GB or larger microSD card

Windows users can follow our step-by-step instructions for loading a disk image on a microSD card using Win32 Disk Imager.

Just use the image you downloaded from Miniand (or anywhere else) instead of the Ubuntu 10.04 image mentioned in that post.

Note that there’s some variation in 4GB SD cards, so some might not actually have enough space. To be on the safe side you may want to use an 8GB or larger card.

If you’re running Mac or Linux, you can find instructions for preparing your microSD card at the Miniand forum post.

Once you’re done preparing your microSD card, open Windows Explorer or another file browser and navigate to the card.

Then download a new evb.bin file from the links provided in the Miniand forum. I used this one.

If necessary, rename the new file so that it’s called evb.bin, and then copy it to the same directory on your microSD card as the file your just deleted.

Now eject the microSD card from your PC, insert it into your MK802, connect a monitor, keyboard, mouse, and power source and in a minute or so you should see a 1920 x 1080 pixel Linux desktop environment.