The MK802 is a tiny computer that looks like a large USB flash drive. It has a 1.5 GHz Allwinner A10 processor, 512MB of RAM, and 4GB of storage, as well as USB and HDMI ports.

But one of the most interesting things about this little $74 computer (available from AliExpress) is the microSD card slot. That’s because while the MK802 ships with the Google Android 4.0 operating system, you can also boot a different OS directly from a microSD card.

We’ve already explored how to run a version of Ubuntu Linux on the MK802. Today I took a light-weight operating system called Puppy Linux for a spin. 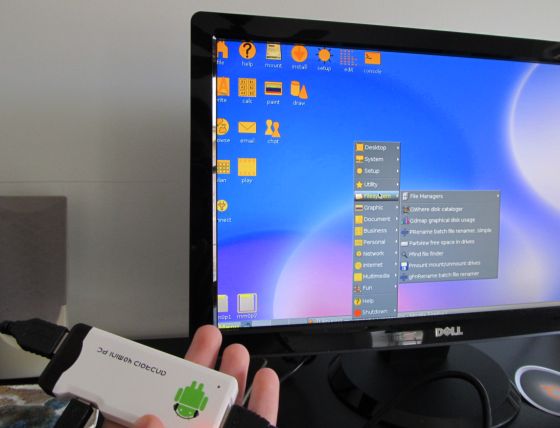 Puppy is designed to run well on computers with slow processors, little RAM, and other limitations — which makes it an excellent choice for a low power device like the MK802.

Following links from CNX Software, I found a version of Puppy pre-built for devices with Allwinner A10 processors, and then loaded it onto a microSD card using the same steps involved in creating an Ubuntu 10.04 bootable SD card (Basically just extract the mele-sd-4gb-lui-5.2.90.img file and then use Win32 Disk Imager to write the image to your microSD card).

Once that was done, all I had to do was insert the microSD card in the MK802, connect a display, power source, and mouse and keyboard. A few minutes later, Puppy was up and running.

Puppy isn’t the prettiest or the most user-friendly Linux-based operating system I’ve used. But it runs pretty quickly on the MK802, and most features seem to work right out of the box.

I had no trouble connecting to my wireless network or running most of the the apps that came pre-installed including a spreadsheet app and text editor. The SeaMonkey web browser didn’t seem to want to open, but I used the Puppy package manager to download and install Firefox 3.6. While it took a little while for the browser to launch or load web pages, I’m still kind of impressed that a $74 , mini computer can handle full desktop-style applications at all.

For the most part, I’ve only been playing with operating systems that have been compiled by other users so far. But CNX Software has instructions for building your own disk image based on Debian, Ubuntu, or another operating system. The images can be used for an MK802, Mele A1000, or other tablet or mini PC with an Allwinner A10 CPU.