Planet Computers hopes to ship its second handheld PC/smartphone in June, and the company is showing off some early prototypes at the Consumer Electronics Show.

The Cosmo Communicator is basically an updated version of the Gemini PDA that company released last year. Like its predecessor, it’s a clamshell device that you can open to reveal a 6 inch touchscreen display and a physical keyboard. Closed, you can use the device like a phone. Opened you can use it like a ridiculously small laptop — and in addition to Android, it can run Linux software.

But the new model has a faster processor, more RAM, a backlit keyboard, and a second screen that lets you do more without opening the device up.

Not all of those features are working on the prototypes Planet Computers is showing off, but the company is showing how they’ll work together to make a better pocket-sized computer. 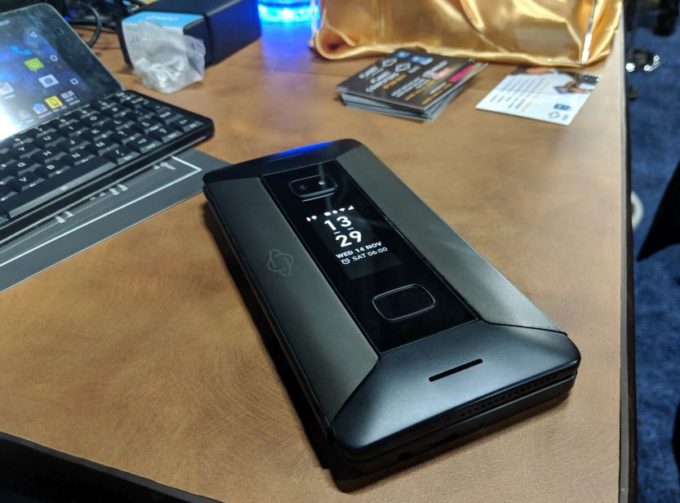 On the front of the Cosmo, there’s a 2 inch AMOLED touchscreen display that you’ll be able to use to view the time, date, and weather, notifications, text messages, incoming phone calls, or other information. You could also use this screen to control media playback without opening the device.

At least that’s the idea. Right now Planet Computers is showing off prototypes with displays. But touch input doesn’t work, so all we can see so far is a loop showing a bunch of different types of information that could theoretically be displayed on the small screen.

The company also has some prototypes with an updated hinge, but none with the new backlit keyboard.

The company is hoping to have everything worked out in time to begin shipping the phone/computer this summer to folks who backed a crowdfunding campaign that launched last year.

If you missed out on the campaign, you can still put an order at Indiegogo for $569 and up. You probably won’t get anything until June at the latest, but that’s still a substantial discount off the list price of $799. And while there are never any guarantees when you back a crowdfunding project, the fact that Planet Computers has shipped a handheld PC before suggests that they could be able to do it again.

Planet Computers says it also recently received Google Mobile Services certification for Android 8.1 on the Gemini PDA, so you can expect a software update for that device soon.