The Asus ZenFone 2 is an Android smartphone with a 5.5 inch, full HD display, an Intel Moorefield 64-bit processor, and a starting price of $199 for an unlocked phone.

It’s also one of the first smartphones that will be available with 4GB of RAM, although the entry-level model will have just half that much. 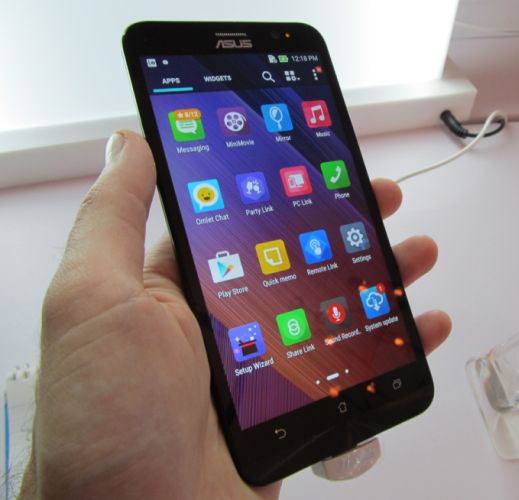 Asus unveiled the ZenFone 2 during CES in Las Vegas this week, although it will likely launch in other markets before it’s available in the US. Asus does hope to bring the ZenFone 2 to the States in the second quarter of 2015, which would make it one of the few smartphones from Asus available in this country.

The phone has a 3000mAh battery and a fast-charge feature that lets you charge the phone for 40 minutes to bring the battery to 60 percent of capacity. It has a 13MP rear camera, 5MP front camera, a microSD card slot, and support for 802.11ac WiFi, NFC, Bluetooth 4.0, LTE.

For a phone with a 5.5 inch screen, the ZenFone 2 doesn’t feel all that large… or maybe I’ve just been spending too much time with big phones lately to notice. The screen looks great, the system seems pretty responsive, and that’s about all I was able to test because there was no internet access in the Asus suite where I got a chance to play with the ZenFone 2.

The phone will be available in a variety of colors including black, white, red, grey, and gold.

Asus also offers a smaller model with a 5 inch screen and a less powerful processor in some markets, but not in the US.