After going up for pre-order through an Indiegogo crowdfunding campaign earlier this year, the GPD Win 3 handheld gaming computer is now available for purchase from retail stores.

Powered by an Intel Tiger Lake processor with Intel Iris Xe graphics, the little computer features a 5.5 inch touchscreen display centered between game controllers. The display can also slide up to reveal a capacitive touch keyboard for text entry.

GPD began shipping the Win 3 to backers of the crowdfunding campaign in April. Now folks who missed out on the campaign have a few more options for purchasing one… but you’ll have to pay a bit more. 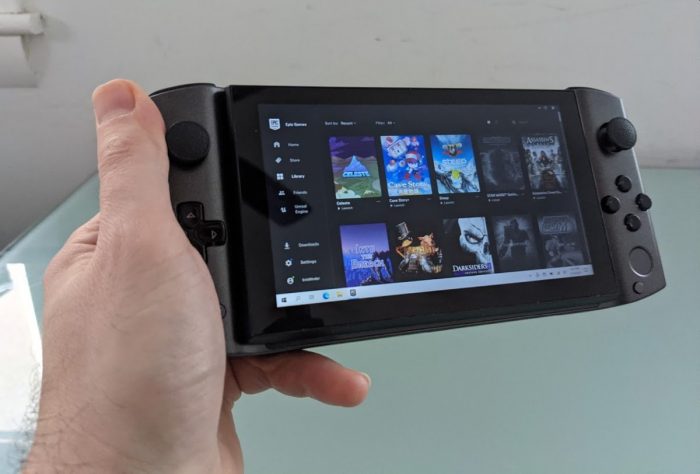 While early backers of the Indiegogo campaign were able to reserve the GPD Win 3 for $799 and up, here are the current pricing availability details as of early May, 2021:

Note that the starting prices are usually for a model with an Intel Core i5-1135G7 processor, 16GB of LPDDR4x-4266 memory, and a 1TB PCIe NVMe solid state drive, with higher-priced models featuring a Core i7-1165G7 processor with extra CPU and graphics horsepower. But for some reason Banggood is selling the Core i7 model for what appears to be an entry-level price, while the store has a Core i5 version for $50 more.

When I reviewed a pre-release prototype of the GPD Win 3 earlier this year, I was impressed with the design and performance of this little computer. It has the guts of a decent laptop packed into a gadget that’s not much larger than a phone (albeit a rather bulky phone), making it comfortable to use for gaming just about anywhere.

It’s also a full-fledged computer that you could use for media consumption, document editing, content creation, and more… but you’ll probably want to connect an external keyboard, mouse, and display for those tasks. The built-in keyboard is pretty lousy. I generally found it easier to enter text using an on-screen virtual keyboard than the physical keyboard. Thanks to a Thunderbolt 4 port and support for an optional docking station, it’s easy to connect accessories though.

But the GPD Win 3 is very clearly first and foremost a portable gaming machine. And while it’s not exactly a cheap portable gaming machine (especially now that crowdfunding is over and promotional prices are no longer available), it’s an unusual device that doesn’t have a lot of competition… although that’s beginning to change.\

The AYA Neo handheld gaming PC with a 7 inch display, an AMD Ryzen 5 4500U processor, and no physical keyboard will begin shipping to crowdfunding backers later this month. The AYA Neo sold for $699 and up during crowdfunding, but the price rose to $1019 during an InDemand campaign. At the moment AYA isn’t taking any more orders, so if you missed the crowdfunding campaign and still want one, you’ll have to wait a while.

Meanwhile One Netbook plans to launch a crowdfunding campaign soon for its One XPlayer handheld gaming PC with an 8.4 inch display, an Intel Tiger Lake processor, and no physical keyboard. Pricing for that model hasn’t been announced yet, but I wouldn’t expect it to be cheaper than the AYA Neo or GPD Win 3.