Google is rolling out an update to its search app for Android that lets you use “OK, Google” to start a search, set a reminder, or perform other actions from any screen on your phone.

Up until now you could only do this while you were on the home screen. 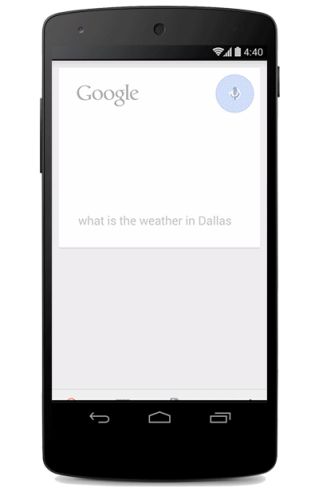 Droid Life reports that Google Search 3.5.14 is the first version of Google’s search app for Android with OK, Google everywhere support. Note that it’ll only work if you have Google Play Services 5.0 which is rolling out to users now.

Update: Google says the feature works from within any app that’s not already using your microphone as long as the screen is on or your device is charging. You can turn on the feature by going to Google Settings, choosing Search & Now, then Voice, then checking the “From any screen” option under “OK Google.

Most phones will still need to be active to use the feature — the Motorola Moto X is still one of the only phones that you can talk to while the screen is off (well, you can talk to any phone, just don’t expect a response from most).

The new Search app also includes audio history, letting Google use a history of your voice searches to offer customized voice prediction. Once Google gets a good idea of what your voice sounds like, it’ll do an even better job of recognizing words you say aloud.