The GMK NucBox is a tiny desktop computer small enough to hold in the palm of your hand, but powerful enough to handle 4K video playback and many common tasks thanks to its 10-watt Intel Celeron J4125 quad-core processor.

GMK plans to begin taking pre-orders for $159 and up through an Indiegogo crowdfunding campaign that begins August 25th, and the company recently shipped me a demo unit to test. 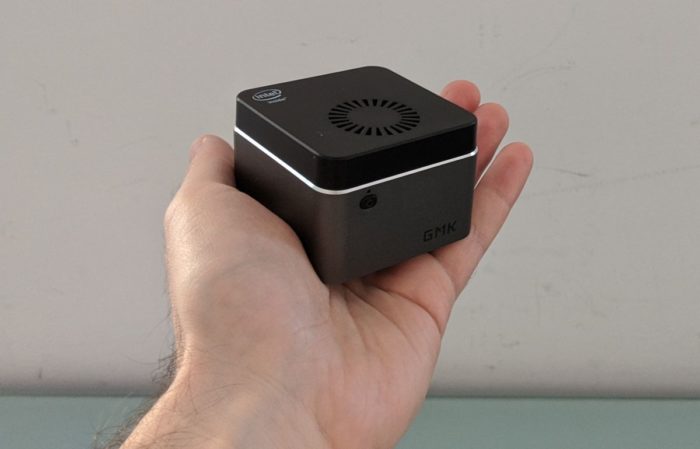 First announced in July, the little computer measures 2.4″ x 2.4″ x 1.7″ and weighs about 4.4 ounces. In addition to an Intel Gemini Lake processor with Intel UHD 600 graphics, the little computer features 8GB of LPDDR4 RAM, a microSD card reader, WiFi 5 and Bluetooth 4.2 support, an HDMI 2.0 port, two USB 3.0 Type-A ports, a headphone jack, and a USB-C port (for power only).

GMK will offer three prices/configurations of the NucBox:

The GMK NucBox is a tiny bit smaller than the Chuwi LarkBox I reviewed earlier this year, but otherwise the two devices are very, very similar. They both have the same basic shape and size and the same port selection.

But GMK’s version stands out in a few ways. It has a metal-and-plastic body (rather than all plastic). There’s a two-color design of grey and black (rather than all black). The power button is smaller. There’s a circular vent above the fan (instead of a rectangle). And you have to remove the small padded feet on the bottom of the case in order to open it up and access the M.2 2242 SSD slot.

The NucBox is clearly based on the same design as the Chuwi LarkBox and several other recent 2.4 inch mini PCs. But this tiny computer is one of the most powerful devices in this emerging category thanks to its 10-watt Intel Gemini Lake processor with a base speed of 2 GHz and turbo speeds up to 2.7 GHz. 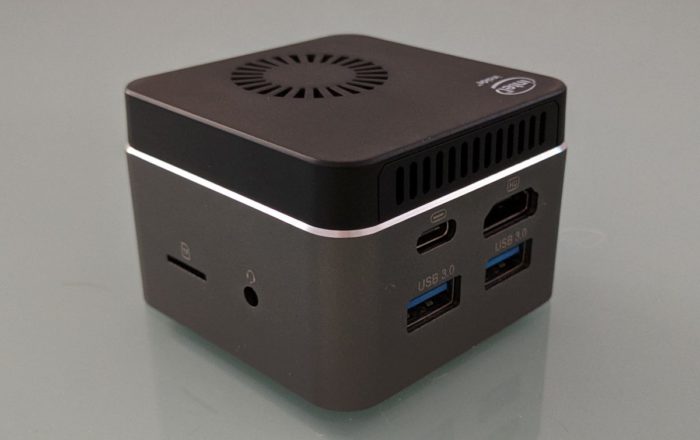 It also ships standard with an SSD rather than cheaper, slower eMMC storage. According to CrystalDiskMark, the Chuwi LarkBox has top sequential read/write speeds of 211 MB/s and 57 MB/S. The GMK NucBox tops out at 516 MB/s and 470 MB/s.

You can remove four screws on the bottom of the computer to remove and replace the SSD, but that’s just about the only simple upgrade option. 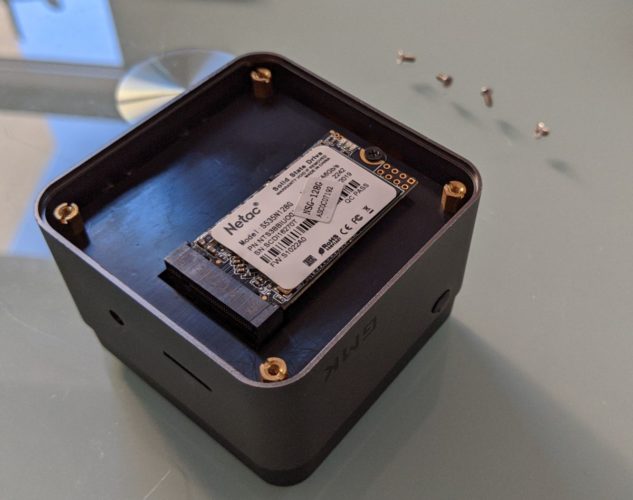 The little computer also comes with a 12V/2A power adapter that looks more like a smartphone charger than a typical PC power brick. 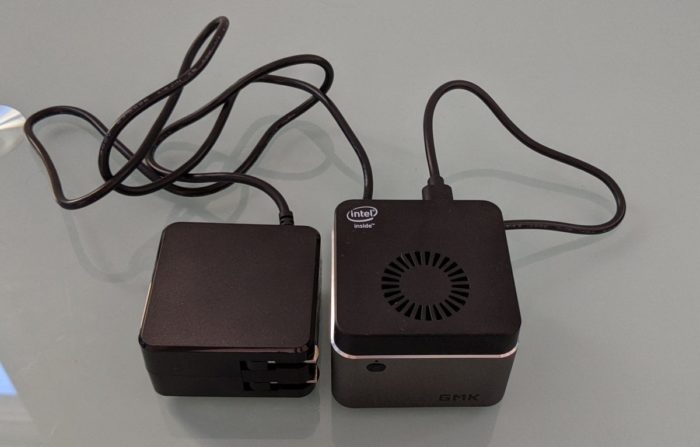 I’ll share more benchmark results and performance notes after I’ve spent more time using the NucBox. For now I’ll say that it feels reasonably snappy, but the little computer’s fan runs nearly constantly. I can’t hear it over the air conditioning in my office, but if I turn off the window A/C unit, the fan noise is audible and a little louder than what I’ve come to expect from the Chuwi LarkBox (although the LarkBox fan makes a higher-pitched sound, which may be a little more annoying, if quieter).

For now, here’s a spec comparison between the GMK NucBox and several other 2.4 inch mini PCs: