The Ouya may be a $99 video game console designed to run Android games on a TV. But it can also function as an inexpensive media center… or as a classic PC.

Developer Paul Lamb is working to port the open source Frodo C64 emulator to run on the Ouya, which means that you can treat this game console like a Commodore 64 computer. 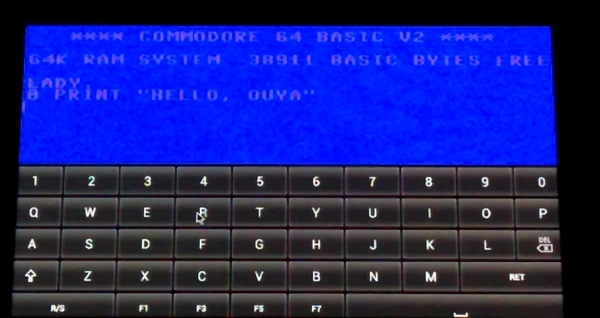 On the one hand, the Ouya has far better hardware than the original C64. On the other hand, it’s always fun to use a device for something that pushes it beyond its original purpose.

Lamb is the same developer responsible for porting the Mupen64 Nintendo 64 emulator to run on the Ouya. His goal is to make it work with both the Ouya game controller as well as with a plug-in keyboard. Right now Forod C64 is really designed for devices with touchscreen displays (which covers most Android devices, but not the Ouya).

In addition to running basic PC software and printing “Hello World” style commands, the Commodore 64 also ran a decent number of games, so this C64 emulator could make it possible to run some games designed for the 30-year-old PC on a modern device.