The Yotaphone 2 is a smartphone with two screens. There’s a 5 inch, full HD color AMOLED display on one side. But flip the phone over and you’ll find a 4.7 inch, 960 x 540 pixel E Ink screen.

You can use the color screen for typical Android apps and the energy efficient, black and white E Ink screen for functions that might not require color or a fast screen refresh rate. That could include anything from using your phone dialer to looking up directions. And of course you can read eBooks on the E Ink screen.

Yota Devices launched the Yotaphone 2 in Europe and Asia in December. Now the company is showing off the phone in the United States, where it might be available for purchase later in 2015. 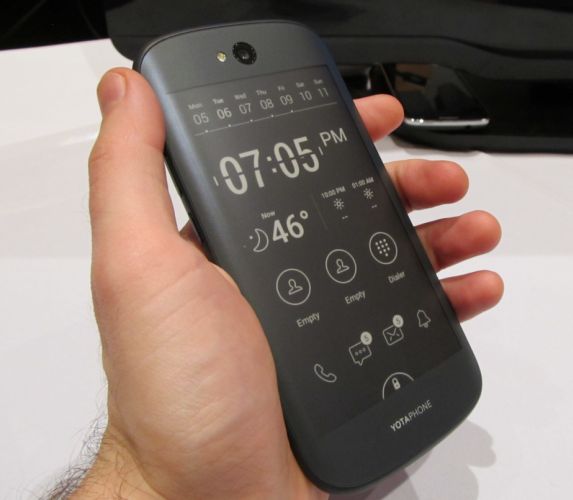 The phone has reasonably good hardware including a Qualcomm Snapdragon 800 processor, 2GB of RAM, 32GB of storage 802.11ac WiFi, a 2500mAh battery, an 8MP rear camera and 2.1MP front camera.

But it’s the dual display setup that really makes the Yotaphone 2 special.

As the name suggests, this isn’t the first dual-screen phone from Yota. But while the original had an ePaper screen that could only work with a few specific apps, you can use the new model’s E Ink display to run just about any Android app. You might not have much fun watching videos or playing games on an E Ink screen, but you can do it if you want.

More useful functions include the ability to display pictures, maps, or widgets with information such as the weather or email messages on the back of the phone. They’ll be visible even when the AMOLED color display is turned off. In fact, if your phone’s battery dies, the E Ink screen will still display the last image you had on it. So if your phone is about to die while you’re at the airport, you can still have it display the QR code for your boarding pass without recharging your phone.

An unlocked Yotaphone 2 sells for over $800 in the UK. While it could be tough to justify spending that kind of money on a new phone with a 2013-era processor, there’s really nothing else quite like the Yotaphone 2 on the market at any price.