Google’s Chromecast provides one of the cheapest and easiest ways to stream internet audio and video to your TV. Just plug the $35 stick into your TV, run a setup utility to connect to your WiFi network, and you can stream content from Netflix, YouTube, HBO, Hulu and other sites while using your phone, tablet or PC as a remote control.

But the Chromecast isn’t the only game in town — you can sort of do the same thing with a cheap Miracast wireless display adapter like the $30 Tronsmart T1000 — and as an added bonus, you can mirror your display, which means games, videos, web browsers, and other content will show up on your big screen.

So which is the better value, the Chromecast or the T1000? Well, that depends on what you’re looking for. 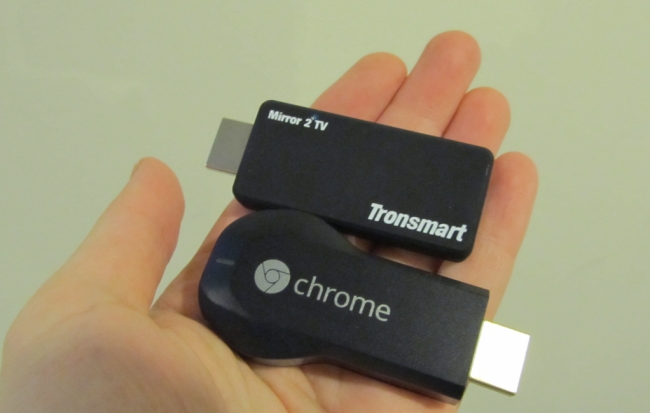 The Chromecast is only designed to work with apps and services that support the Google Cast protocol. As of mid-December, 2013 that means you can use it to stream content from over a dozen apps including Netflix, HBO, Hulu, YouTube, Google Play Movies, Pandora, VEVO, Songza, Plex, and Google Play Music.

You can also stream the contents of a web browser tab if you use the Google Cast plugin for Chrome on a PC or Chromebook.

But while the hardware is capable of  doing much more, such as turning your TV into an external display for your phone, that’s not something that’s officially supported (at least not yet).

The Tronsmart T1000, on the other hand, supports Miracast wireless display technology — which means it can turn your TV into an external display for your phone, tablet, or PC.

Anything playing on your mobile device can be beamed to the big screen. That includes videos, games, presentations, web browsers, and more. Theoretically this gives the T1000 an edge in the content department, because if you can play a video on your phone, you can play it on your TV — but real-world performance leaves a bit to be desired.

There’s also an EZCast app which creates a direct connection between your phone and TV, letting you play videos, music files, or other media on your TV without actually mirroring your device. Instead your phone or tablet acts as a remote control.

OK, so which one actually works better?

Right, so in theory the Tronsmart T1000 is more versatile because it can take anything happening on your phone and throw it on your TV. In practice, it’s a bit trickier to use.

The Chromecast and T1000 both boot quickly and take a few more seconds to connect to the internet. But before you can beam content from your phone to your TV with the T1000, you’ll need to fire up the EZCast app and either select the content you want to play or enable EZMirror to start Miracast mode (which can take a minute or two to connect).

Google’s Chromecast, on the other hand, is automatically detected as soon as it’s turned on. Just fire up a supported app on your phone, tablet, or PC and you’ll see a little icon that you can tap to send audio or video to your TV instead of the smaller screen on your mobile device. Then just hit the play button in the Netflix, YouTube, or other app and it’ll start playing on your TV.

In other words it takes less time and less effort to use the Chromecast for simple tasks such as streaming a TV show from Hulu Plus. There’s another advantage — Google’s Chromecast actually pulls audio, video and other files straight from the internet, not from your mobile device. That means you can use your phone to start a Netflix video, for example, and then continue using your phone to surf the web, play games, or do just about anything else without stopping video playback. You can even shut off your phone’s screen.

Can I use it with my Windows tablet (or other device)?

As mentioned above, the Chromecast is designed to work with Android or iOS apps, but you can also use a Chrome browser tab on a Windows, OS X, or Chrome OS machine.

The T1000 works with any device works with any device that supports the EZCast app, so that covers Windows, OS X, Android, and iOS. But if you enter EZMirror mode, it also works as a Miracast adapter, which means you can treat it like a wireless display for your Windows tablet, Android phone, or other device.

Both devices are capable of streaming high-definition video to your TV. But when you use your phone to start a video on the Chromecast, you’re telling the device to grab the video from the internet.

When you do it with the T1000, you’re actually sending video from your phone to your TV.

When the T1000 is working well, you’d be hard pressed to tell the difference. But at times there’s a bit of lag, pixelation, or other problems. For example, I fired up an Android game on my phone while connected to the T1000 and tried to play without looking at the phone screen. The graphics were a bit pixelated, the audio was glitchy, and there was enough lag to make it tough to play the game.

On the other hand, videos streamed from the phone to the TV tend to look pretty good.

All told, the Tronsmart T1000 can do more than the Google Chromecast, which isn’t bad for a device that costs less money. But the while the Chromecast doesn’t do as much, the things it can do, it does better.

Still — if there’s one reason to consider a Miracast adapter like the Tronsmart T1000, it’s because you can use it as an inexpensive wireless display adapter for a device that would otherwise be tough to connect to an external display. The Dell Venue 8 Pro, for instance, is an 8 inch Windows 8.1 tablet with only a single micro USB port. There’s no HDMI or VGA connector, and there’s not even a separate power jack.

By using that single port to connect a wireless mouse and keyboard dongle, and using the T1000 to connect an external display, I was able to essentially turn Dell’s little tablet into a desktop computer. Getting it to connect to the display took a few minutes, and there’s a bit more lag than I’d like… but it certainly demonstrates that the T1000 can do some things that the Chromecast cannot.

Personally, I’ll keep using my $35 Chromecast to watch Netflix videos on TV. But I can imagine a few circumstances where a device like the $30 T1000 might be a better solution.

Disclosure: Geekbuying sent me a Tronsmart T1000 for testing purposes. Promise: I’ll be giving it away to a reader soon, now that I’ve had a chance to test it. Stay tuned for contest details.

17 replies on “Chromecast vs the Tronsmart T1000 wireless display adapter”