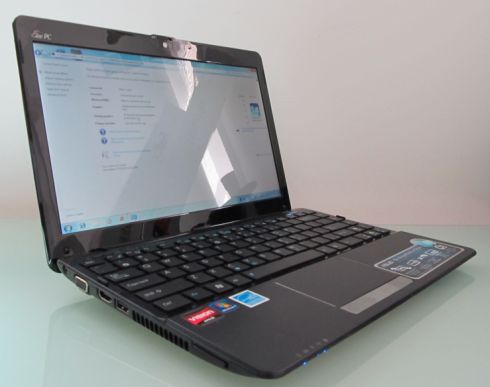 The Asus Eee PC 1215B is a notebook with a 12.1 inch display and it looks an awful lot like all of the other recent 12.1 inch laptops from Asus. It has the same keyboard and touchpad layout, and generally has the same ports, and software. Even the power adapter looks like the one you get with other Asus Eee PC notebooks. But it’s what’s inside that counts, because the Eee PC 1215B is the first Asus laptop to ship with an AMD Fusion chipset.

This chipset offers better-than-netbook performance for day-to-day tasks and support for 1080p HD video playback and 3D graphics acceleration. At the same time, the AMD chip uses just 18W of power, which helps the laptop get decent battery life.

This configuration retails for around $450 or less

So how does the Asus Eee PC 1215B stack up against other Eee PC notebooks, or the HP Pavilion dm1z, a notebook with nearly identical specs? Read on to find out.

It’s been a while since Asus has dramatically redesigned its 12.1 inch laptop case. If you’ve seen any Eee PC 12xx notebooks in the last few years, you already have a pretty good idea what the Eee PC 1215B looks like – a large netbook. In fact, from a distance you’d be hard pressed to tell the laptop apart from one of the company’s 10 inch netbooks such as the Eee PC 1015PN. 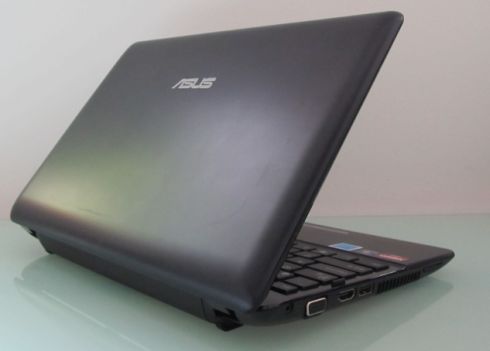 That’s not necessarily a bad thing though. Asus has done a pretty good job of making inexpensive yet easy to use thin and light laptops over the past few years. The keyboard is one of the best around, at least in terms of layout, and the touchpad is nice and wide — although I’d prefer to have two buttons below the touch area rather than one.

The case is made of plastic, but it feels relatively durable, and the matte lid isn’t as prone to showing off your fingerprints as some glossy laptop lids. 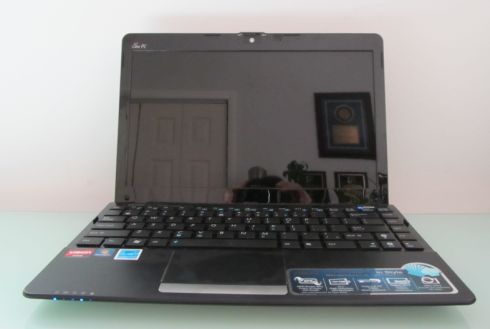 The display, on the other hand, is glossy, and while it offers decent viewing angles, it turns into a mirror when you shine a light directly at it. The plastic bezel around the screen is also rather shiny.

The laptop has a sort of elongated teardrop shape, making it thicker in the rear than at the front when the lid is closed. When you open the lid, the bottom of the lid moves down behind the back of the laptop, which prevents you from opening the lid very wide.

Around the sides of the laptop you’ll find VGA and HDMI ports, 3 USB ports, (including one USB 3.0 port), Ethernet and audio jacks and an SDHC card slot. 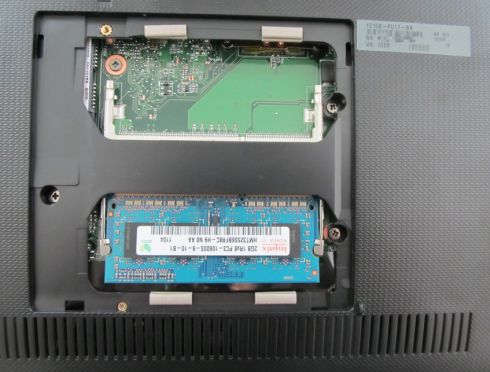 There’s a single access panel on the base of the laptop which you can open to replace or upgrade the RAM. 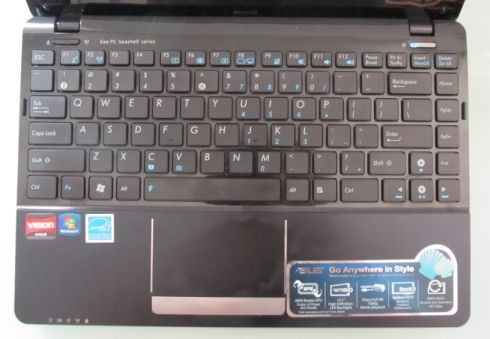 The keyboard features flat chiclet-style keys with small gaps between each. On the right side of the keyboard there’s room for a dedicated row of Home, Function, Page up and Page down keys, while the arrow keys in the lower right corner serve double-duty as media playback controls when you hold down the Fn key. 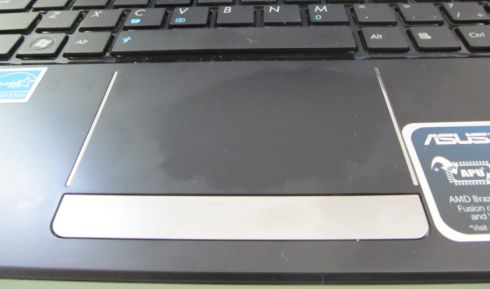 The touchpad is nice and wide and supports two-finger gestures. It has a matte finish and matches the palm rest in color and texture, but it’s easy to detect the edges of the touchpad with your fingers thanks to the chrome borders. There’s a single large button below the touchpad which you have to press a little harder than I’d like to register left and right-click actions.

While the Eee PC 1215B looks like most other recent Eee PC notebooks, it’s what’s inside that counts. Asus has opted for a 1.6 GHz AMD E-350 dual core processor with Radeon HD 6310 graphics in lieu of the usual Intel Atom chip. The result is a computer which is much faster than most Atom-based netbooks. I ran a series of benchmarks to see just how much faster. 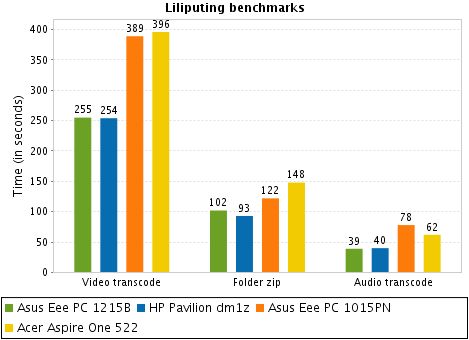 The first set of tests involve CPU-intensive tasks such as converting a video from AVI to Xvid, transcoding an audio file from WAV to MP3, and creating a ZIP archive from a folder with over 2,000 files.

As you can see in the chart above, the Eee PC 1215B was noticeably faster than the Eee PC 1015PN in all of these tasks. The Eee PC 1015PN is a 10 inch netbook with a 1.5 GHz Intel Atom N550 dual core processor and NVIDIA ION 2 graphics. Since these tests all relied on the CPU rather than the graphics capabilities, the new model was the clear winner.

I also threw in comparisons with two other AMD-powered laptops, the HP Pavilion dm1z which features nearly identical specifications to the Eee PC 1215B, and the Acer Aspire One 522 which has a 1 GHz AMD C-50 dual core processor and Radeon HD 6250 graphics.

I should point out that while the laptop offers better-than-netbook performance, it’s not necessarily the fastest machine I’ve ever tested. The Lenovo ThinkPad Edge 11, for instance, with an Intel Core i3 processor was faster at most tasks I threw at it. But the Edge 11 isn’t available in the US and most laptops in its class carry higher price tags than the Asus Eee PC 1215B. 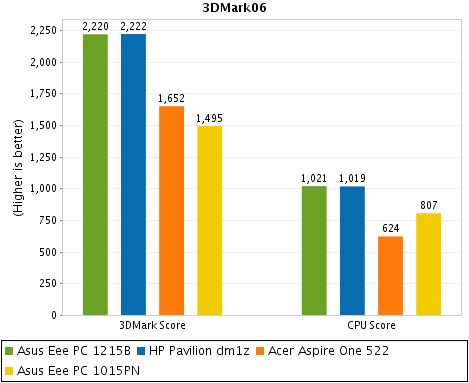 OK, so the laptop is pretty good at CPU-heavy tasks. But what about graphics performance? I ran the 3DMark06 benchmark, and again the Eee PC 1215B virtually tied the HP Pavilion dm1z.

The laptop also came out well ahead of the Eee PC 1015PN and the acer Aspire One 522 in these tests, which measure gaming performance. It’s worth noting that the Eee PC 1015PN has a stripped down version of NVIDIA’s ION graphics card though. The version used in larger laptops and desktop computers comes out ahead of the Radeon HD 6310 chip. But the difference isn’t all that great.

Basically, you should have no problems watching 1080p HD video content with this laptop. It should also be able to decode Blu-ray discs if you have a USB drive. And many modern video games should play smoothly. But if you’re looking for a gaming rig, you could probably do better.

The Eee PC 1215B was one of the few laptops I’ve tested that received a passing grade in the Street Fighter IV benchmark. But that grade was an E. When I ran the benchmark at a screen resolution of 1280 x 720 pixels, Street Fighter played at 26.03 frames per second. That jumped up to 32.94 frames per second when I reduced the screen resolution to 1024 x 600, but that’s not exactly the best way to experience a game. 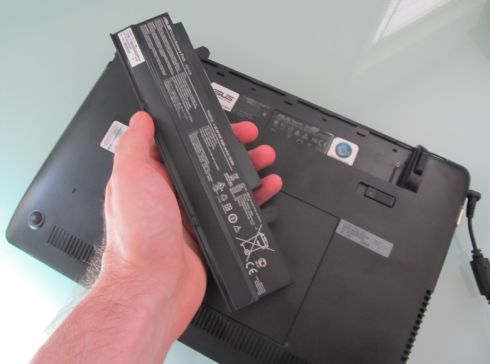 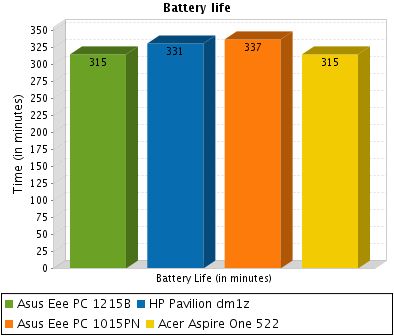 I was a little surprised when I put together my battery life comparison chart to note that the difference between the four laptops I’ve been comparing throughout this review is pretty slim. In fact, because battery life can vary from situation to situation, I’d say that these four laptops all basically run for about the same amount of time on a charge.

There are laptops, such as the Asus Eee PC 1001P which will offer substantially more run time. But it’s tough to find one that offers the combination of price, performance, and battery life that the Eee PC 1215B offers… unless you go with another AMD Fusion-based system such as the $449 HP Pavilion dm1z.

The Asus Eee PC 1215B is a solid little laptop. If you’re looking for something with a little more oomph than a typical Intel Atom-powered machine, you could certainly do a lot worse. The Radeon HD 6310 graphics won’t offer quite the performance you would get from the latest NVIDIA ION chip, but the CPU more than makes up for that. 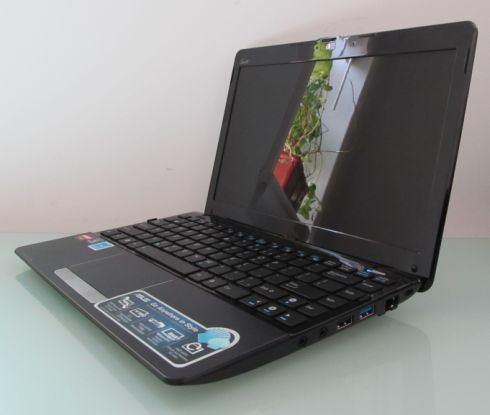 The HP Pavilion dm1z is another good choice, but there are three good reasons to consider the Asus notebook over HP’s model. The Eee PC 1215B features a much better touchpad. The laptop also has a USB 3.0 port, if that’s the sort of thing that matters to you. And the Asus notebook is typically a bit cheaper than HP’s model unless you happen to pick up the Pavilion dm1z when it’s on sale.

The Asus Eee PC 1215B is also available in a variety of colors. While Asus sent me the solid black model, you can also find the laptop with white and red cases, although the screen bezel and keyboard are black on all three versions.