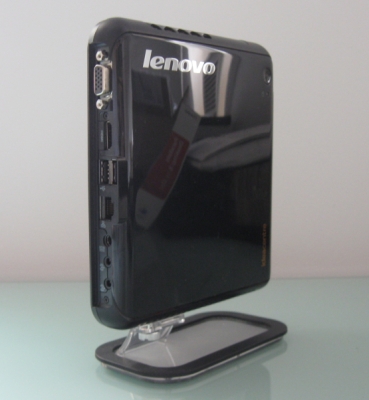 The Lenovo IdeaCentre Q150 is a tiny desktop computer with a low power Intel Atom processor and optional NVIDIA ION graphics which turn this little machine into something of a multimedia powerhouse — almost. The computer isn’t much larger than an optical disc drive, and as such there’s no room for an internal disk drive, which means that you’ll need to plug one in if you want to watch DVDs or Blu-ray discs. Same goes for TV tuners — if you want to watch or record live TV, you’re going to need to plug in a USB tuner.

That said, the built-in hardware on the demo unit Lenovo sent me to review handles HD video, Flash video, and most other multimedia tasks I could throw at it beautifully. The computer also got some of the highest benchmark scores of any netbook or nettop I’ve tested to date.

Lenovo ships the IdeaCentre Q150 with a USB keyboard and USB mouse, but you can also choose a wireless, handheld multimedia keyboard with an integrated trackball. This ads about $60 to the price of the nettop, but makes it much easier to use if you decide to stick your computer next to a TV and don’t want to get your wires tangled. Lenovo sent me a wireless keyboard to test as well.

for a model with a single core Atom processor, integrated graphics, and Windows XP. You can step up to Windows 7, a dual core chip, and NVIDIA ION graphics for just $399

(during the latest promotion). To find out how the computer stacks up against the competition, read on.

The Lenovo IdeaCentre Q150 is small, thing, and easily mistaken for a USB disc drive. But it’s a fully functional computer. On the back of this tiny black square-shaped box (with rounded edges), you’ll find VGA, HDMI, Ethernet, and audio ports as well as two VGA ports.

The front has a small plastic lid covering 2 more USB ports and an S/PDIF port. 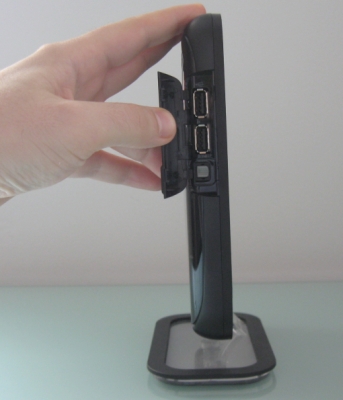 If you plan to use the nettop as a desktop style PC, the 4 USB ports are probably good enough. On the other hand, if you plan to use it as a media PC and want to plug in a USB optical disc drive, extra storage, and/or a TV tuner, you might run into a bit of difficulty since the USB ports are awfully close to one another. The flap on the front also makes the idea of leaving anything permanently plugged in rather unapealing. 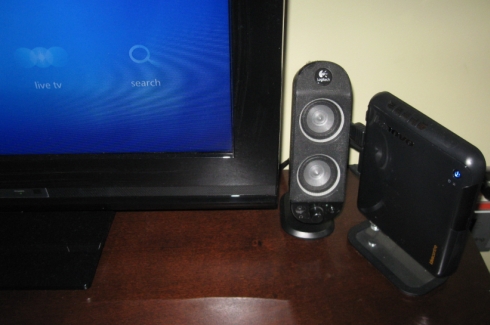 On the other hand, there’s included VESA mount that you can use to attach the computer to the back of a TV or monitor so you can hide it away out of sight. 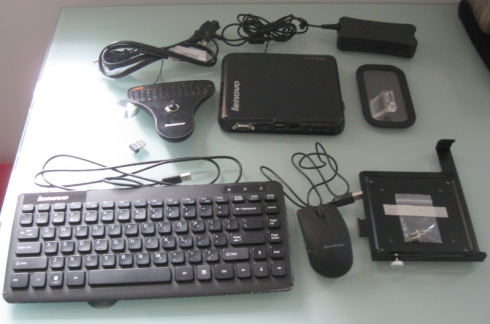 For those who would rather not hide the computer altogether, you can either sit the nettop flat on a table or desk or use the included stand to prop the computer up vertically so that it looks a bit like a small, black Nintendo Wii with rounded corners. OK, I guess it doesn’t really lok all that Wii-like.

The standard USB mouse and keyboard that come with the IdeaCentre Q150 are nothing to write home about. The optional Lenovo multimedia keyboard, on the other hand is a rather interesting little device. 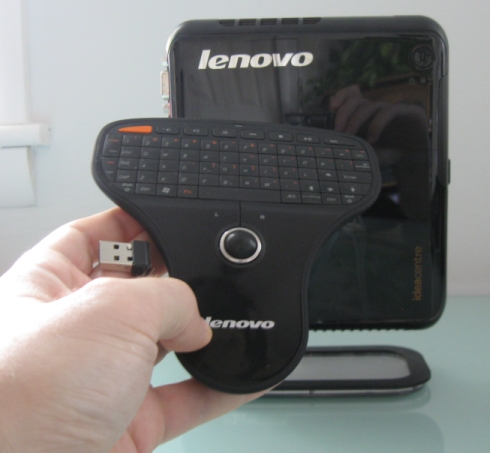 The multimedia keyboard is made to fit in the palm of your hand. There’s a trackball just below the center which is fairly easy to use with your thumb, and there are left and right click areas just above the trackball. Overall I found the trackball pretty easy to use.

The keyboard is another story. The wireless keyboard is hand-sized, which means that the keyboard is more like one you would find on a smartphone than a typical full-sized keyboard. Touch-typing is pretty much out of the question, and instead you’re expected to type with your thumbs. This works pretty well for entering URLs or search queries, but I wouldn’t want to compose lengthy emails or other long documents using this keyboard.

There’s a dedicated key on the right for Ctrl+Alt+Delete, which i shandy since it would be hard to simultaneously press three buttons on a thumb keyboard. There are media buttons at the top for controlling the volume and pausing, playing, stopping, rewinding, and fast forwarding media. 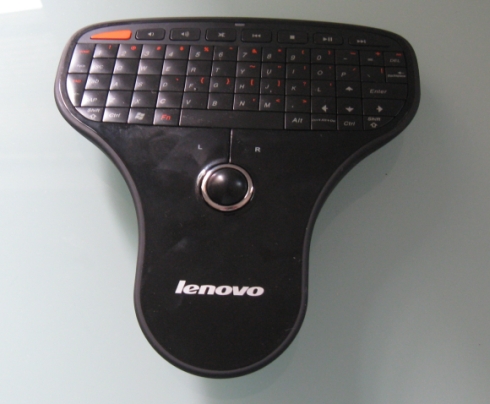 Personally, I prefer to use a full-sized wireless keyboard with my HTPC, but if you’re looking for a tiny keyboard with a trackball that won’t take up too much space, the multimedia keyboard could fit the bill. I’d still recommend picking up a Windows Media Center style remote control if you plan to use the Q150 as a home theater PC though, since it’s still much easier to navigate through Windows Media Center and other media apps using a dedicated remote which you can control by feel without looking down at a device with nearly 70 keys.

Lenovo sells the multimedia keyboard for $60, but you can actually find it for far less at various retailers. Amazon is currently selling the keybaord for under $44

The Lenovo IdeaCentre Q150 isn’t exactly a speed demon. Its 1.66GHz Intel Atom D510 dual core CPU is a little faster than a typical netbook processor and a little better at multitasking, but not very much. But where the computer really shines is graphics performance, thanks to its zippy new NVIDIA ION graphics processor. 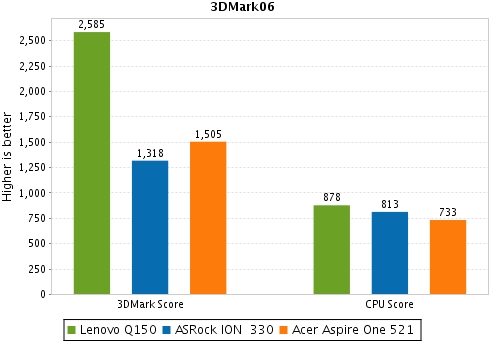 I also threw in the scores for the Acer Asire One 521, a 10 inch netbook with and AMD Athlon II Neo K125 single core processor and ATI Radeon HD 4225 graphics. The Aspire One actually bests the older ASRock ION 330 nettop with first generation graphics in the 3DMark06 test, but is no match for the Q150. 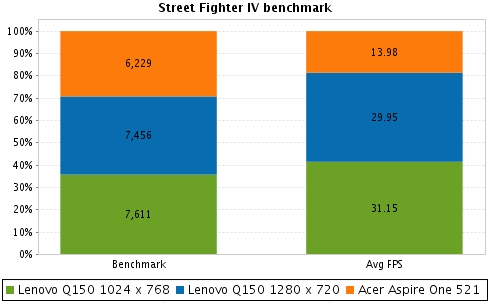 I also ran the Street Fighter IV benchmark on the Lenovo IdeaCentre Q150, and it as the first computer with an Intel Atom processor that I’ve tested which the benchmark deemed capable of running the game, thanks to an average frame rate of about 31 frames per second — but only when I ran the benchmark with a screen resolution of 1024 x 768. When I tried at 1280 x 720, the fps dropped to 29.95, which is just enough of a difference for the benchmark to judge the computer unworthy.

In practical terms, that means you’re going to have a slightly better gaming experience, but the Q150 still isn’t really designed to be a gaming machine and while it will easily handle some newer games and most games that are a few years old, it’s really better suited as a multimedia-centric computer for playing movies, streaming web video, listening to music, and performing other media jukebox-like tasks.

I tested the Lenovo IdeaCentre Q150 by running 1080p Flash videos with no noticeable stuttering or audio/video sync issues. I also had no problem pulling in Flash content in a web browser. 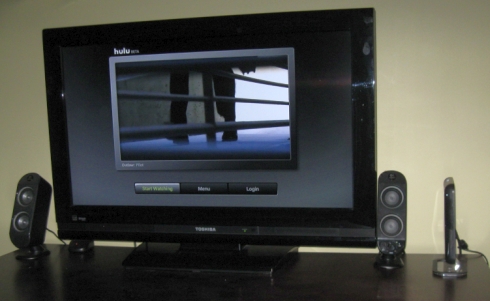 Then I fired up Hulu Desktop, an application designed to give Hulu a full-screen, remote control-friendly user interface, and it ran like a champ. 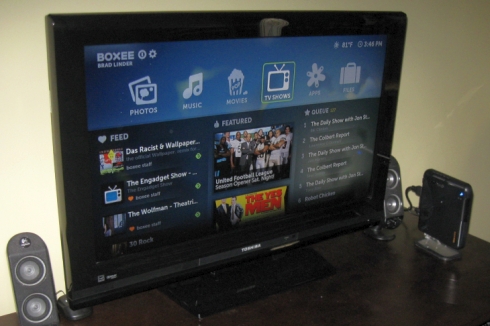 I also tried Boxee, a media-centric application for PC, Mac and Linux which gives you a couch-friendly user interface for accessing media stored on your PC as well as web audio and video from dozens of sources including Hulu, Netflix, Pandora, and other media sites. Again, I had no problems running Boxee using the IdeaCentre Q150 while hooked up to a 32 inch 720p HDTV.

I have a number of TV shows and movies stored on another computer on my home network, and the Q150 also had no problems streaming these 720p HD video files over an 802.11g WiFi connection.

I plugged in a USB TV tuner and started up Windows Media Center to see how the computer handles live TV broadcasts, and didn’t experience any significant problems. A few channels that come in well on my primary home theater PC were a bit harder to pick up on the Q150, but I think that has more to do with the Pinnacle USB TV tuner I was using than the computer itself. 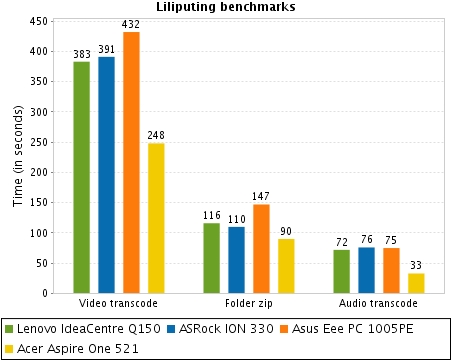 In terms of CPU performance, the dual core Intel Atom D510 CPU wasn’t noticeably different from the Intel Atom 330 dual core CPU found in the ASRock Ion 330 nettop I reviewed last year. I ran a series of tests by transcoding large audio and video files and creating a large ZIP file from a directory with over 2,000 individual files. The Lenovo IdeaCentre Q150 and ASRock ION 330 took almost the exact same amount of time to perform most of these tasks.

I also threw in the scores for the Acer Aspire 521, which has a single core AMD Neo K125 CPU. While the Lenovo nettop has higher performance graphics, as demonstrated by the benchmarks above, the Acer laptop managed to best the nettop in every test of CPU performance that I could throw at it. 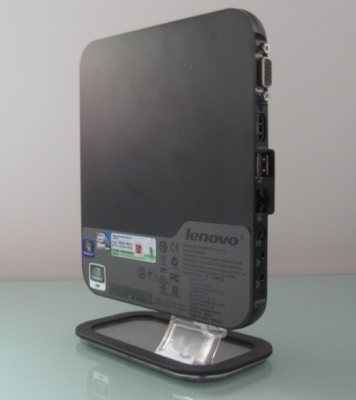 Long story short — the Lenovo IdeaCentre Q150 has some graphics chops, but it’s not exactly a fast computer for general use. That said, it’s not really all that slow either.

The Lenovo IdeaCentre Q150 is a nice little computer for playing video, some 3D games, or getting a bit of work done. It may not be the fastest computer on the market, but it’s one of the smallest… which might count for something if you’re looking for a PC which you can stick in your living room without drawing too much attention to the fact that there’s a PC in your living room. 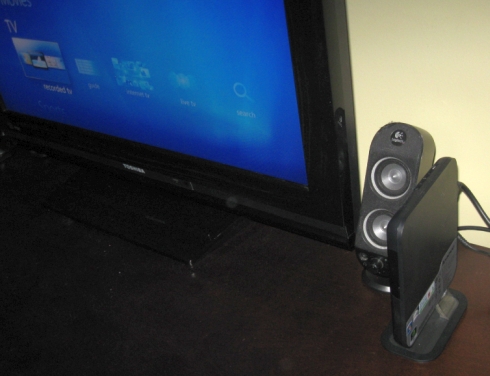 That said, there are a few things to keep in mind if you’re thinking about turning this little machine into a home theater PC. First, it doesn’t have a disc drive or built-in TV tuner. If you’re primarily interested in playing web video, files downloaded from the internet, or items streamed over a home network that may not be a problem.

Second, the computer is a little noisier than I’d like. It’s not exactly jet-engine outside your window noisy, but the fan noise is definitely loud enough to be noticeable if you’re not watching a movie or listening to music — and it might be bothersome during quiet scenes in movies.

Finally, if you’re looking for a computer that can’t just play video, or even record live TV with a TV tuner, but actually transcode video to save space on your hard drive, this might not be the best machine for you. I use my primary media center PC to record TV shows as MPEG-2 files and then transcode the files automatically to DivX once the recording is complete so cut in half (or more) the amount of space they take up on my hard drive. But I use a machine with a Core 2 Duo CPU to do that. If I tried the same thing on the Lenovo IdeaCentre Q150 it would take several times longer to complete each job and the computer would likely always be chugging away at transcoding video files. 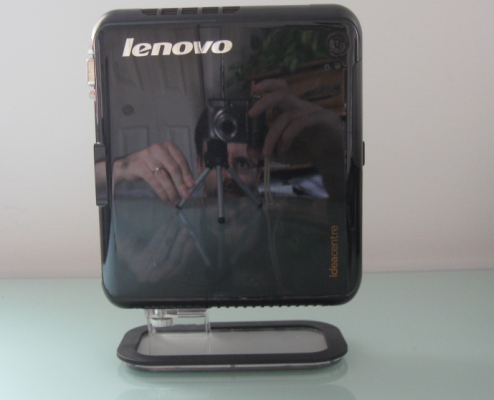 That said, the IdeaCentre Q150 would make an ideal second HTPC for a household like mine that already has a PC plugged into the big screen TV in the living room. It’s more than capable of streaming recordings across a home network to a second TV. I’m actually looking for a machine to just that, and the IdeaCentre Q150 is a strong contender at this point.

, but if you’re looking for the model with high quality multimedia capabilities, I’d highly recommend spending the extra $50 to get the version with NVIDIA ION graphics and Windows 7 Home Premium.