This week Google revealed that more than 40 percent of Android devices are running Jelly Bean builds, which means they have Android 4.1 or later installed. But that doesn’t mean everyone gets the latest and greatest features at the same time.

About a week after Google started rolling out Android 4.3 to Nexus phone and tablet users, the latest version of Android is available to customers who bought Google Play Editions of the Samsung Galaxy S4 and HTC One smartphones. 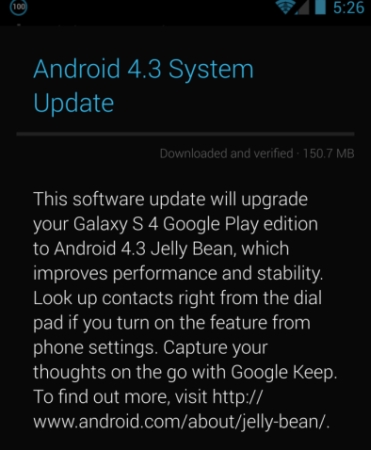 It’ll likely be a while before we see Android 4.3 come to versions of those phones that folks buy from wireless carriers, because Samsung and HTC will need to customize firmware updates with their TouchWiz and Sense software.

One of the fastest ways to get a new version of Android on a non-Nexus phone is usually to unlock the bootloader and install a custom ROM such as Paranoid Android or CyanogenMod. Developers of both are working on new builds based on Android 4.3 — but they’re still in the early beta stages, so they may be buggy.

It’s nice to have new options for Google Play edition devices that get software updates almost as quickly as Nexus phones. Hopefully the prompt software updates will continue for at least a year or two. Google makes the source code for its software available to Samsung and HTC, but it’s up to those companies to release the actual updates for these phones.