Amazon’s new box designed to bring the internet to your TV is called the Amazon Fire TV. It’s designed to compete with the Apple TV, Google Chromecast, and Roku, among other things, and Amazon thinks it has a solution that offers better performance, a better ecosystem, and easier navigation.

The Fire TV also offers more than online music and video… it also supports games and other apps. 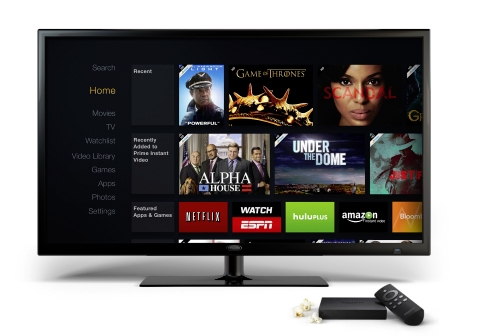 The Amazon Fire TV features a quad-core processor, 2GB of RAM, and the kind of dedicated graphics processor normally found in smartphones.

Amazon says customers often complain that existing set-top-boxes are slow, have difficult-to-search user interfaces, and have closed ecosystems which don’t support some of their favorite apps. The company thinks its box tackles all of those complaints.

The box itself is a thin square device that can hang out near your TV. It comes with a Bluetooth remote control with seven buttons and a 5-way direction button and a microphone for voice controls.

You can use it to navigate on-screen menus to find movies, TV shows, games and other apps. The Fire TV also has an “ASAP” feature which predicts what shows you’ll want to see based on your habits. Combined with the speedy processor and roomy amount of memory, Amazon thinks the Fire TV will offer a much faster, smoother experience than a Roku, Apple TV, or other device.

During the launch event Amazon showed off a screen filled with apps that will run ont he device — including Hulu Plus, Netflix, WatchESPN, NBA, MLB, NBA, YouTube, Crackle, TuneIn Radio, and Plex.

Additional apps including HBO Go and Pandora are coming soon.

That’s a pretty good selection of third-party apps. Amazon also has a “best value” feature which helps you figure out which service is the cheapest to use when you want to watch a specific program — but at launch it only works with Amazon Instant Video and Hulu Plus. 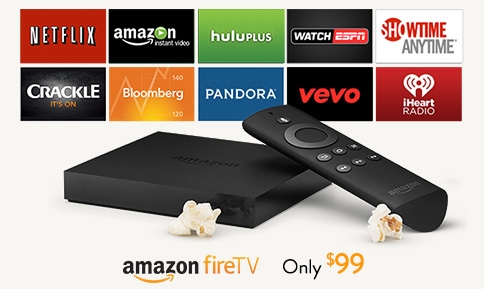 The Fire TV operating system is based on Android, just like the software on Amazon’s Kindle Fire tablets. So developers can port their existing Android or HTML5 apps to run on Amazon’s set-top box.

At a time when Amazon, Hulu, Netflix, and others are constantly competing with one another for exclusive streaming rights to TV shows and movies (just this week Amazon snatched 24 away from Netflix, and each company products its own original programming), there’s a lot of value in a box that supports a range of apps from competing services. Up until now Roku was probably king of the hill, but the Fire TV looks awfully competitive.

While there’s support for third-party apps, the Fire TV also leverages Amazon’s existing ecosystem with features such as Amazon CloudDrive for storage. For instance, you can snap a photo with your phone, automatically save it to CloudDrive and see it almost instantly on your TV. 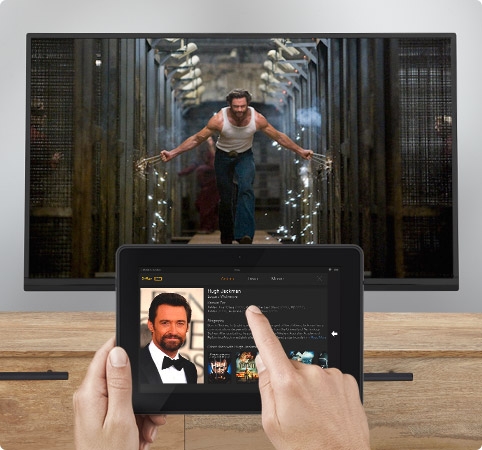 You can also use a Kindle Fire HDX tablet as a “second screen” device to view “X-Ray for Movies and TV Shows” info. While you’re watching a video on the Fire TV, you can use your tablet to pull up info about the cast and other details from IDMB (which is owned by Amazon). X-Ray can also display lyrics for songs as they play on the TV box.

Unlike some smart TV boxes, Amazon’s Fire TV also supports multitasking. For example you can listen to music from one app while running a different app.

The Fire TV will also be able to run games (much like a Kindle Fire tablet). To keep the price of the TV box itself low, the Fire TV won’t ship standard with a video game controller that not everyone will use.

But for $40 you’ll be able to purchase a game controller which comes with 1,000 Amazon coins credit to purchase games. 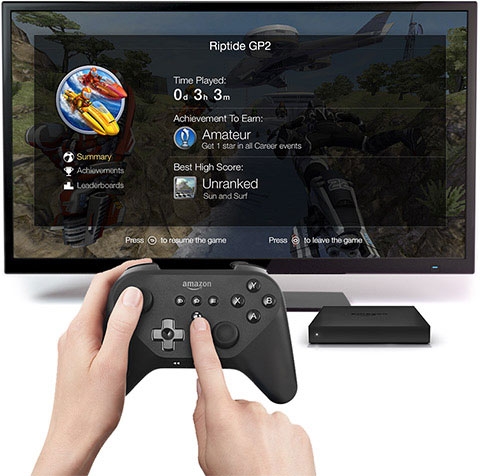 Microsoft demonstrated some of the first games for Fire TV including Minecraft and Asphalt 8 as well as some Fire TV-first devices such as Sev Zero, a third-person shooter.

The company says there are many free-to-play games with in-app purchases, but the average game will sell for about $1.85 (or a lot less than a typical Xbox or PlayStation game).

The Amazon Fire TV features some of the most impressive hardware of any mainstream TV box to date, including:

The remote control measures 1.5″ x 5.5″ x 0.6″ and weighs about 2.4 ounces. It features a voice search button, play pause, and rewind buttons, home, back, and menu buttons, and a select button surrounded by 5-way navigation buttons. The Bluetooth 2.1 remote is powered by 2 AAA batteries.

The optional Fire TV Game Controller has analog sticks, a D-pad, Android buttons including home, back, and menu, media playback buttons, and gaming buttons including A, B, X, Y, and shoulder buttons. It measures 6″ x 4.2″ x 2.4″ and weighs about 10 ounces and runs on 2 AA batteries.